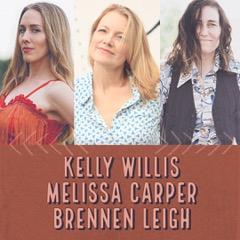 Kelly Willis is an American country music singer-songwriter, whose music has been described as alternative country and new traditionalist.  MARRIED to Bruce Robison.

“Melissa Carper has a voice that is old beyond her time, with just the right kind of twangy lisp. She sounds like a 70’s country star transported into the digital age, rhinestones and all!” - Devon Leger, Bluegrass Situation

Brennen Leigh is an American songwriter, guitar player, mandolin player and singer whose to-the-point storytelling style has elevated her to cult icon status in Europe, Scandinavia, across the United States, South America and the United Kingdom.