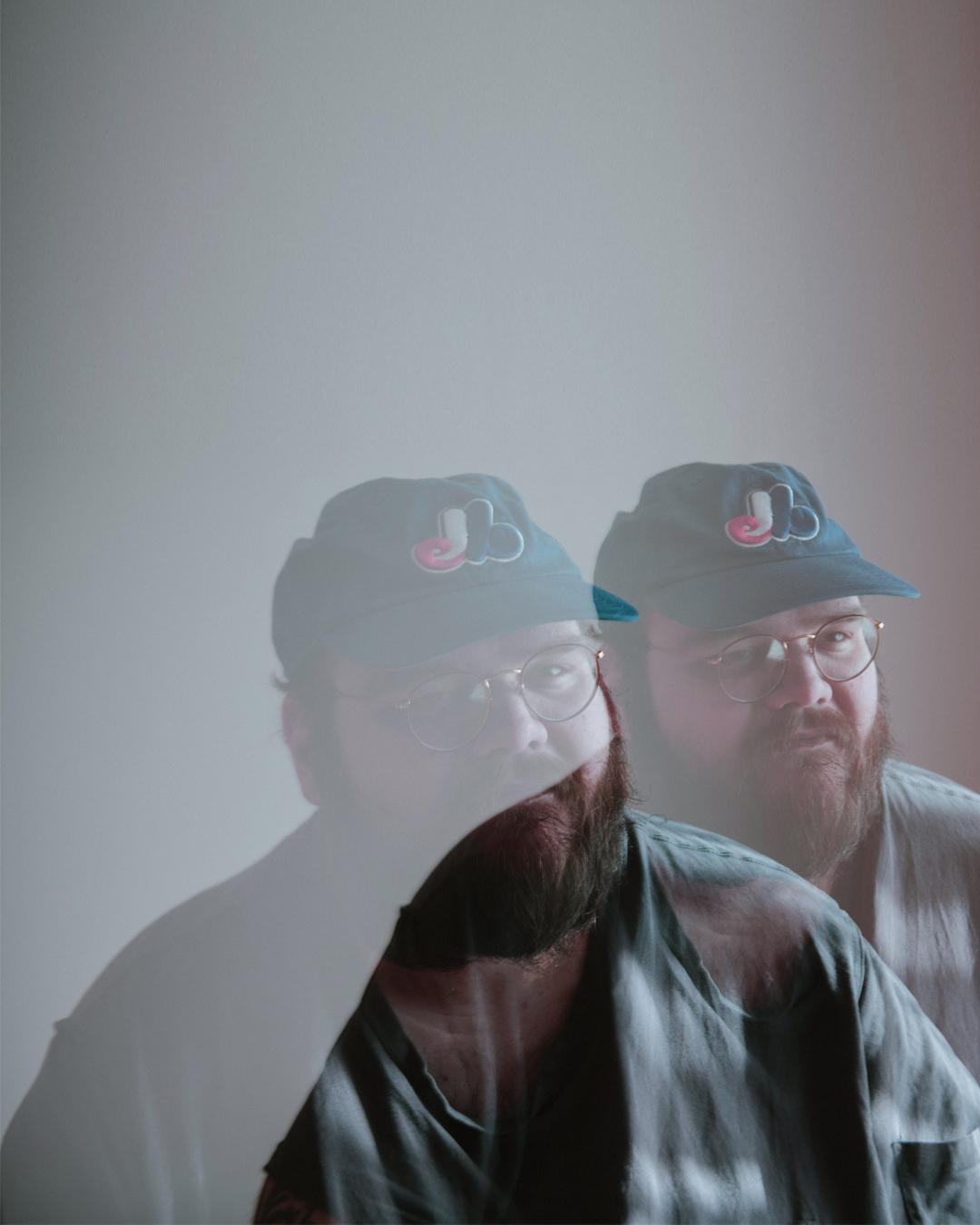 John Moreland  -  Birds In The Ceiling

John Moreland doesn’t have the answers, and he’s not sure anyone does. But he’s still curious, basking in the comfort of a question, and along the way, those of us listening feel moved to ask our own. “I don’t ever want to sound like I have answers, because I don’t,” he says. “These songs are all questions. Everything I write is just trying to figure stuff out.”

Moreland is discussing his new album Birds in the Ceiling, a nine-song collection that offers the most comprehensive insight into the thoughts and sounds swimming around in his head to date. A compelling blend of acoustic folk and avant-garde pop playfulness, Birds in the Ceiling lives confidently in a space of its own, enriched by tradition but never encumbered by it. The songwriting that has stunned fans and critics alike since 2015’s High on Tulsa Heat remains potent, while the sonic evolution that unfolds on the record feels like a natural expansion of 2020’s acclaimed LP5.

The New Yorker, Pitchfork, Fresh Air, Paste, GQ, and others have embraced Moreland’s meditative songs, while performances on The Late Show with Stephen Colbert, CBS This Morning, NPR Tiny Desk Concert, and more have introduced Moreland to millions. And yet, while the Tulsa-based Moreland is grateful for the respect and musical conversation he’s now having with people around the world, he is also more focused on the idea of just talking to one person– –or even himself. “Through the years, I’ve felt like I’m increasingly talking to myself in my songs, more and more,” he says. “Maybe in the past, I wasn’t aware of it, but now, I am. I think doing that has helped me be less hard on myself, which makes you more generous and compassionate in general.”

That helps explain why even if Moreland is reaching out to someone else, there is no judgment. “I’m in the same boat with whoever I’m talking to,” Moreland says.

Moreland’s songs do feel intimate––like overheard conversations or solitary meditations. “I want to talk one-on-one to someone in a song,” he says. “I don’t want to address a group, really, because I think that’s when it’s easy to start pontificating––and it gets less honest.”

On Birds in the Ceiling, Moreland’s singing contributes to the feelings of hushed intimacy. Wielding a warm, sandpaper soul voice, Moreland got used to singing loudly as he began playing in bars, fighting to be heard over chattering crowds. “When I first started singing, I was very self-conscious about it,” he says. “I think I tried to affect my voice more. Singing loud could be a security blanket sometimes. On the new album, on a lot of the songs I was definitely making a conscious effort to sing quieter––almost whisper.”

Produced by Matt Pence and Moreland, Birds in the Ceiling is dynamic: a folk record that refuses to stay in its lane. It’s the second album for Pence with Moreland, who sees the former––a Denton, Texas-based engineer, producer, and drummer––as an ideal musical partner. “We have a lot of the same influences, and I have been really influenced by his bands,” Moreland says. “It feels really effortless.”

Album opener “Ugly Faces” establishes the new instrumental ground Moreland is covering: piano and acoustic guitar are joined by drum break and percussive electronic chirps then swells as Moreland’s familiar voice delivers questions, observations, and apologies. “I got used to shutting off parts of myself and feeling like, ‘Well, I’m this kind of artist, so this part of me and that part of me don’t fit––I’m going to leave them out,” Moreland says of the record’s arrangements. “On this album, I really just wanted to throw that rule out completely. Anything I’m into or that has moved me is fair game.” Cue 90s roots pop: Moreland mentions Sarah McLachlan and Sheryl Crow as influences, then points to the pioneering sampling from the 80s and 90s, as well as the hooks of Janet Jackson. “I feel like I’m old enough now to say, ‘I love pop,’” he says––then laughs a little.

“Lion’s Den” underscores the pop point: A mathy electronic beat kicks off the song before Moreland’s gorgeous acoustic guitar playing, nimble but lush, sweeps listeners away. The lyrics explore feelings of displacement and connection––then disconnection. “I think most of the album lyrically is about alienation and isolation––really about what my wife and I were going through during the pandemic,” Moreland says. “Not really relating to the pandemic itself so much, but just the circumstances we were both going through with family and friends, which was all colored through this terrifying, dystopian lens.”

Crunchy drum machine claps give way to menacing acoustic guitar on “Cheap Idols Dressed in Expensive Garbage." Moreland wrote the song after a friend introduced him to a social media account that highlights pastors wearing designer clothes. “It feels like things just continue to get harder for working people," he says. “It’s hard to afford life these days.”

Moreland points to “Generational Dust”––a moving portrait of the complicated relationship with roots and place––as an album favorite. A gentle showcase of Moreland’s accomplished acoustic guitar playing, “Dim Little Light” taps into the bigness of universal connection and the smallness of individual perspective. While Moreland no longer considers himself religious, the concepts and language picked up during his Bible Belt upbringing emerge in his songs, recast in new, independent musings about self-acceptance, honest questions, and hope––but never as answers. ““At this point in my life, I'm quite comfortable with the mystery of it all,” Moreland says.

“Claim Your Prize” packs a heartbreaking punch, tucked into upbeat guitar strums and a mournful chorus. Moreland’s guitar playing stands out throughout the record. “I wanted to expand my guitar playing on this album,” he says. “I played all the guitars, and I just wanted to approach it with more compositional intent.” The beautiful “Neon Middle June” explores the connection that deepened between Moreland and his wife during the pandemic, when they were “holed up together, home all the time, and it was just weird and lovely.” Pianist John Calvin Abney’s jaw-dropping arrangement and playing happened by chance: He sat down to warm up for the song in the studio, not realizing tape was rolling. The freewheeling, abstract keys perfect the song’s lovely weirdness.

The album’s title track is the graceful closer, pensive, breathtaking, and brimming with hope and gratitude. “The last verse is really about learning not to impose your own essences and projections onto things, and to just let things be what they are,” Moreland says.

Letting things just be what they are is a powerful guiding force for Moreland, determining not just how he interacts with others, but how he treats himself. “When you remove boundaries and instead of holding back parts of yourself––when you say, ‘Okay, I’m going to put all of me into this,’” Moreland says, "You end up making music that nobody else could make.”

Don Giovanni Records has announced the new album from Lee Bains + The Glory Fires will be released on August 5, 2022. The album is titled Old-Time Folks, and was produced in Athens, GA by David Barbe (Drive-By Truckers, Sugar, Son Volt).

On Old-Time Folks, Bains sets out to investigate the band’s stomping grounds of Alabama and West Georgia, and to summon stories of that land’s peoples, rising up collectively to defend and liberate themselves from systems of power and exploitation.

While Lee + the Glory Fires have spent a decade propagating what the New York Times calls “pandemonium with a conscience,” Bains and rhythm section Adam and Blake Williamson recently found themselves listening to records that were more produced, arranged, and textured than their own past work, to records that struck them as timeless and immense, ones that invited you in, to get lost in the details. On many bleary-eyed interstate drives, they talked about wanting to make a classic record – not a transparent document of their playing live with the occasional embellishment – but a record. They talked about working with a producer who had made such albums. About taking Bains’ songs and deconstructing them, stripping them down to their most minimal elements, reimagining them, and building them back up again. They talked about closely considering arrangements, digging into their varied influences. Swapping instruments. Getting high-fidelity sounds. Inviting guest musicians. Incorporating percussion and synthesizers and horns and strings. Maybe even doing a song or two without a blaring electric guitar, or even–gasp–without a guitar at all.

So, that’s what they did. They contacted Athens, GA's David Barbe, whose work with the Drive-By Truckers, Sugar, Son Volt, Vic Chesnutt and countless other artists has earned him a legendary reputation amongst Southern independent rockers, and they agreed to set about bringing this vision to fruition. After months of recording demos with John Paul Foster in Montevallo, Alabama and going over arrangements with Texas punk stalwart and longtime collaborator Tim Kerr (who the band calls their “coach”), the band decamped to Athens to record with Barbe at Chase Park Transduction in December of 2019. Soon after laying down the initial tracks, the COVID-19 pandemic erupted, and the usually hard-touring trio soon found themselves at home with yet more time to consider, flesh out, and arrange this new batch of songs. The result is an album whose levels of dynamics, nuance, range, and intimacy are new for the band. Enriching those explorations are kindred musical spirits like pianist Thayer Sarrano, organist Jay Gonzalez (Drive-By Truckers), singer Kym Register (Loamlands), horn players William Washington and Theresa May (Mourning A BLKstar), and string arranger Annie Leeth, whose idiosyncratic contributions to the album deepen that sense of collectivism that the lyrics invoke.

Just as the album’s music meanders between jagged rock’n’roll and churchy swells, feedback-drenched dirges and orchestral rave-ups, the lyrics lead us through those rich varied lands and time itself: black-masked protestors face SWAT tanks in smoggy cities; Muscogee warriors encircle a colonial fort along a muddy river; incarcerated workers noisily strike in a maximum-security prison surrounded by cottonfields; coal miners barricade the entrance of a mine; kids talk politics in the alley out back of a punk show; families gather outside a country church to prepare a dinner on the grounds. As we encounter these people and places, we sink deeper into what Bains calls “old-time,” that which connects us to those who have gone before, to the land, to each other, and to something deeper and older still.

While tackling such lofty political, historical and philosophical concepts, the album is also the band’s most intimate, vulnerable and spiritual to date. The perspective is both outward- and inward-facing, Bains never taking on the persona or experience of others, but rather writing about the way his own limited experience and perspective of the band’s place can lift the veils of false narratives, and uncover “piles of winding stories” through time. Throughout the record, great forces–whether exploitative or liberatory, reconciliatory or confrontational, grand or humble, condemning or merciful–show up in the smallest, most personal moments of our lives and relationships, both public and private. Little by little, we are drawn into a long arc of freedom, justice, and beloved community, and into a celebration of and thanksgiving for those who do its work.