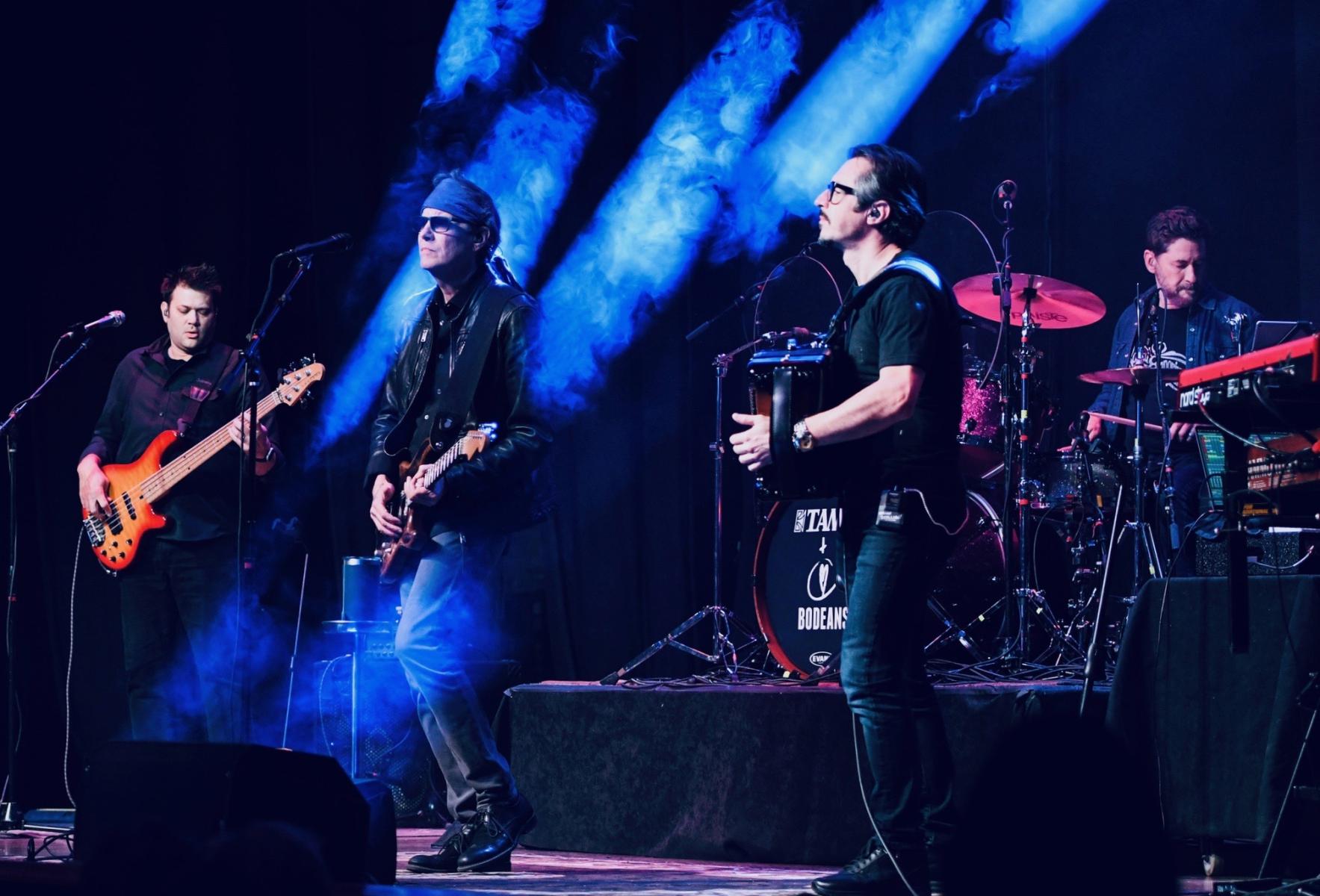 With countless tunes you know from the first note, rip-roaring gigs you can count on, and a whole lot of energy you’ll take home with you, BoDeans continue to contribute to the American songbook as a tried-and-true institution. Founded and led by original frontman, songwriter, multi-instrumentalist, and producer Kurt Neumann, the band’s catalog consists of generational anthems such as “Good Things,” You Don’t Get Much,” “Idaho,” and “Closer To Free,” just to name a few. However, they still reflect the soul and spirit of the modern American experience on their fourteenth full-length offering, 4 The Last Time.

“The music of BoDeans has defined much of my life,” muses Kurt. “I consider myself fortunate to be able to do what I enjoy. I wanted to creatively do something positive for the world instead of just taking from it. So, this is what I’ve chosen to do with my life. The music was always about the blue-collar dream of a better life, and it still is.”

BoDeans emerged out of Waukesha, WI in 1986 with the seminal debut, Love & Hope & Sex & Dreams, produced by T Bone Burnett.  Following Outside Looking In [1987], Home [1989], and Black and White [1991], Go Slow Down [1993] yielded “Closer To Free,” which famously served as the theme song for the smash hit television series Party of Five. With a sought-after discography, their music landed hundreds of television and film placements. Meanwhile, they transformed into a proven live phenomenon by supporting the likes of U2, Bob Dylan, Paul Simon, Tom Petty, The Pretenders, and David Bowie in addition to gracing the bills of Farm Aid, Summerfest, and ACL. Speaking to the group’s legacy, the Rock and Roll Hall of Fame permanently entrenched BoDeans in the Midwest Artists exhibit. Most recently, 2017’s Thirteen arrived to widespread acclaim from The Chicago Tribune and Glide Magazine who spotlighted the music’s “understated grace—an attribute that no doubt fuels the steadfast approach Kurt Neumann has employed of his thirty-plus years as a ‘BoDean’.” Along the way, NETFLIX’s The Ranch also utilized over 70 tunes from Kurt, and he launched his own podcast Staring At The World.

In the midst of the Global Pandemic, he wrote and recorded what would become 4 The Last Time in his Austin, TX studio.

“We have a classic guitar-driven midwestern rock pop sound,” he goes on. “I wanted to make sure there was still some music out there with guitars on it. I feel like I’m getting better at this in my fifties. So, there are a lot of those big rock songs we’ve done for years. I got that vibe down on this record.”

Fittingly, BoDeans kick this chapter off with the high-energy anthem “Ya Gotta Go Crazy.” It charges forward with roots-y countrified swagger punctuated by an unshakable chant and hummable guitar solo.

“When Spring came in Wisconsin, everyone rolled their windows down and turned the radio up,” he recalls. “The music sounded so good. This is meant to be one of those songs that makes you crank the volume and have some fun. In light of difficult times when you’re dealing with depression or challenges, sometimes you’ve got to go out and do some shit that seems a little crazy.”

Then, there’s “A Little More Time.” The stomping groove gives way to another anthemic refrain as he pleads, “Come on baby won’t you give me just a little more time.”

“On the day Tom Petty died, I was really sad,” he admits. “I’ve always been astounded by how good he was— from the time I discovered him at 15 until now. This is my little nod to Tom and The Heartbreakers for what they gave me.”

On “I’m A Mess,” he examines the two lives of a career musician. “I’ve done this for 35 years,” he says. “As you get older, you start a family. When you’re on the traveling circus, you feel really disconnected from your life at home. You’re a mess without the other half of your life.”

“Anyone But You” unfolds as a poignant love song over dreamy piano. Meanwhile, the title track “4 The Last Time” captures the breaking point of a relationship through an emotionally charged vocal originally popularized through an early incarnation of the tune on The Ranch.

“It’s about the despair you go through when a relationship is dying and you can’t save it,” he continues. “It’s a tough and painful place to be. When ‘4 The Last Time’ was on The Ranch, I got so many messages asking for a full version. I thought the title might get everyone talking since we’ve been around for so long. Is this the last time? It’s a topic of conversation when you mention the history of the band.”

The opener “Loved” importantly doubles as a mission statement. With its robust guitars and wild solo, it culminates on a promise to his kids, “You’re gonna know you were loved.”

“It wasn’t until later I found out my mom sent me to the ER when I was two-years-old for getting fingerprints on the dining room table,” he sighs. “I was just surviving as a kid. I have children, and I want them to know how much I love them and how much they mean to me. I didn’t get that from my parents. It’s a message to my kids that I’m going to make sure they know how important they are.”

In the end, BoDeans make an impact through such honesty.

“For the next year, I’m going to be showing up in towns everywhere and trying to bring people together a little more,” he leaves off. “Come to a BoDeans gig, sing along, and forget about everything else. That’s why I play nowadays. I’d like to keep pushing that message as long as I can.”

For someone who’s been on the road for more than 150 dates a year for the past 15 years, Chris Trapper appears to have taken his unsolicited break from touring pretty well. In between weekly livestreams on Facebook & Instagram, Trapper also performed in his fan's backyards across the country all summer long during his “Socially Distanced Backyardapalooza”. To top it all off, Chris entered a studio near his home in Boston, MA to record his new album “Cold Water Waltz”.

“Recording an album in normal times is an interesting experience, so imagine creating new music during a global pandemic. Although I worked intensely with the producers (Brad Young and Jason Meeker) in their respective studios, I could rest assured because as most musicians know; audio engineers social distanced before it was trending.”

“I wrote most of these songs when I was opening for Rob over the summer of 2019. There were lots of days off then and admittedly, it was easy to get inspired to write new songs after witnessing so many thousands of people psyched to hear his songs every night. Rob & I wrote the song “Clear” together and he is truly the coolest guy to co-write with as he is all about the creative process and never about the ego.”

“Cold Water Waltz” was released on October 16th, 2020 and is available at christrapper.com and on all streaming and download services.

"His humble sense of humility is what makes Trapper’s songs so strong... He makes you feel like you are the person he’s singing about.” Popdose