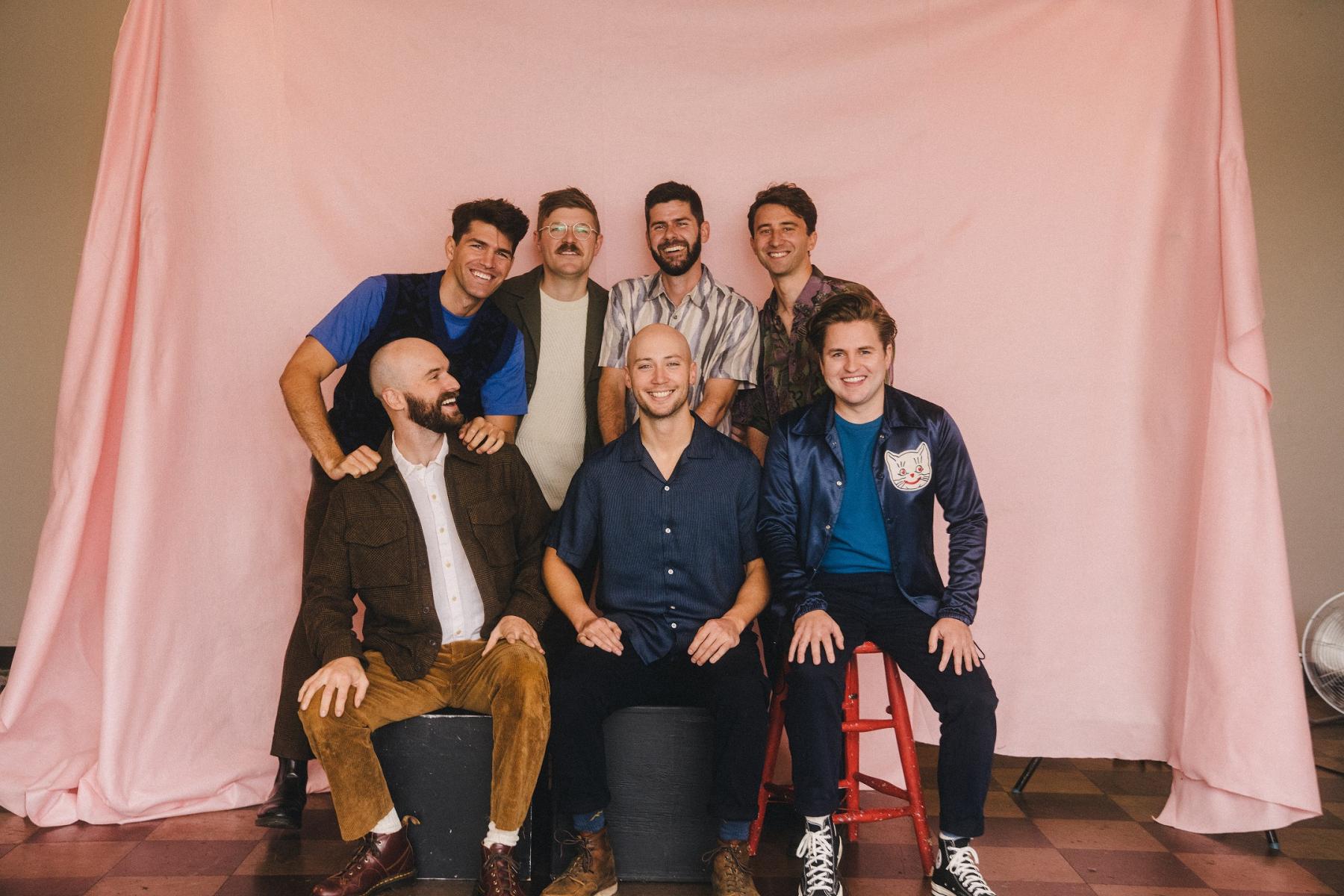 “Some of the most potent music of their careers”  - Seattle Times

"Infectiously thrilling melodies and solid musicianship...The Dip remains a genuinely one of a kind act among its peers, its members’ educated musicianship and nostalgic vision pairing sublimely each time.” - Under the Radar

“Sticking With It by The Dip isn’t just a solid...soul album. It’s also a musical antidepressant with no prescription needed. It is the kind of album you can put on anytime you want to put yourself in a better mood and dance your troubles away.” - Glide Magazine

On their Dualtone Records debut Sticking With It, Seattle-based seven piece The Dip deliver the kind of unbridled rhythm-and-blues that hits on every emotional level. Inciting everything from raw catharsis to heavy-hearted reckoning to wildly exuberant joy, the self-produced album marks a major creative breakthrough for the band. To that end, Sticking With It fully channels the vitality of the freewheeling live show that’s earned them an ardent following over the last decade, matching their sophisticated musicianship with a fantastically loose energy. When met with The Dip’s reflection on matters both timely (the crush of late capitalism, the glaring need for true community) and irrefutably timeless (the vast complexities of love and loss), the resulting body of work captures the mood of the current moment while offering immediate escape into a more elevated state of mind.

The third full-length from The Dip, Sticking With It came to life at their studio in Seattle’s Central District, a modest but meticulously outfitted space the band built entirely on their own. Although the album features a small number of guest musicians (including a Macedonia based string ensemble and background singers Vanessa Bryan, Dasha Chadwick, and Nic Jackson), The Dip crafted each extravagantly arranged track according to a self contained process that allowed for a rare depth of exploration and spontaneity. “It’s really important to us to catch those lightning-in-a bottle moments when you can feel the momentum of a song taking shape,” says drummer Jarred Katz. “At the same time, it makes a huge difference to have this homebase where we can take our time with the sounds and not worry about that precious studio clock ticking away.”

Kicking off with a magnificent bang, Sticking With It opens on “Paddle to the Stars”: a prime introduction to the groove-heavy and richly detailed sound The Dip have embodied since playing house parties in the early 2010s. The first song recorded for the album, “Paddle to the Stars” arrives as a striking departure from the reverb drenched aesthetic the band’s favored in the past. “We’d gotten some nicer gear to play with, and wanted to try something completely different in terms of our guitar sounds,” notes guitarist Jacob Lundgren. “We ended up going with a very dry sound with no reverb behind it, which allows you to really hear the room and feels so much more like the live show.” And as lead vocalist Thomas Eddy reveals, the song’s stark quality is perfectly suited to its candid declaration of devotion. “It’s about being in relationship with someone who’s emotionally in touch beyond your own abilities, but recognizing that and wanting to invest in opening up,” he says. “I liked the idea of playing with the image of the immensity of the ocean, how it’s sustaining but also dangerous— and if you don’t watch out, it’ll get you.”

In its intimate examination of the human heart, Sticking With It also includes tracks like “Sleep On It” (a delicately layered love song about “someone who only gets to see the object of their affection in their dreams, so they’re just waiting until they can go to sleep again,” according to Eddy). One of the album’s most profoundly moving moments, “When You Lose Someone” brilliantly contrasts its meditation on grief with the rapturous harmonies of Bryan, Chadwick, and Jackson. “They’ve been singing together for over a decade and they’ve got an impeccable blend in the room, so we captured that by recording the trio gathered around one microphone,” recalls trumpet player Brennan Carter. “They were on board with whatever was required to elevate the music, and the results are undeniable.” And on “Real Contender,” The Dip present a bold but bittersweet standout built on a blues-country groove and shapeshifting arrangement courtesy of tenor sax player Levi Gillis. “It’s about someone who’s always been there as a friend but who now wants to be considered in a romantic way,” says Eddy. “I was really inspired by how Levi’s intro was upbeat but sorrowful, which is a compelling thing to work with as a Songwriter.”

While Sticking With It endlessly spotlights each member’s exceptional craftsmanship, The Dip embraced a sort of anti- perfectionism in every step of the process. “One of the main goals for the album was to create that feeling of all of us in a room together, instead of worrying too much about everything lining up perfectly,” says Katz. Not only essential in shaping Sticking With It’s sense of abandon, that approach echoes the uniquely communal spirit at the heart of the group. “In other bands there might be a hierarchy as far as who’s in charge and who writes the music, but we make sure to keep everyone involved,” says Katz. “With seven people it can be hard to agree on anything, but to me all the success we’ve had so far has to do with being very democratic and letting everyone have equal say,” Eddy continues. “We all believe in doing it our way, handling everything ourselves and making sure we’re choosing the right songs for the right Reasons.”

After years of defying trends and following their own distinct vision, The Dip have steadily amassed a passionate fanbase (an element reflected in their tremendous organic success on Spotify). In the making of Sticking With It, the band kept their ever-growing reach in mind, ultimately creating their most impactful work to date. “With the lyrics I tried to evoke certain emotions that aren’t often showcased in popular music, with the hope that people will come away feeling validated or understood,” says Eddy. Indeed, the title to Sticking With It partly refers to the joyful sense of gritty perseverance The Dip hope to impart to their audience. “We’re in this strange moment when sometimes it’s difficult to even get out of bed because of what’s going on in the world,” says Katz. “But over the years we’ve had so many people tell us that our songs have helped them get through a rough patch, or break through to a new beginning in their lives. That’s something we’re honored to provide for everyone, and hopefully these songs will do the same.”

At the beginning of 2020, Sir Woman, aka Kelsey Wilson (Wild Child, Glorietta), was primed to hit the road with her band to promote her much-anticipated debut album Party City, when the world changed.

With fewer reasons to celebrate, the band (dubbed Best New Act at the 2020 Austin Music Awards) ditched the party vibe in favor of a more aptly titled record for troubled times. Bitch, a 5 song EP, came out in October 2020, near the end of what can only be described as a Bitch of a year.

Now the party is back, and Wilson, along with her Sir Woman band (Lunar Rae on drums, Taylor Craft on bass, Dancey Jenkins on keyboards, Nik Lee on guitar, and the irrepressible Spice and Uncle Roy on backing vocals) are setting stages on fire. Opening 2021 with three sold-out shows at the legendary Stubb's Amphitheater (one with Black Pumas and two with Shakey Graves) was a perfect (if surreal) way to come out of hibernation. "Playing to six thousand people within a couple weeks - everyone of whom was ready throw down and get back to smiling and dancing - was so cathartic," says Wilson.

Re-titled simply as Sir Woman, Wilson released the record in March 2022 after over a dozen dance floor melting performances at SXSW. Each of the record's singles showcases a different side to the band's funky, fresh sound:

• "Blame It On The Water" - a sublime groover inspired by Kelsey's relationship to the rivers and streams growing up in the Hill Country outside Austin. "Water has always been so important to my life; it's nourishment, it's movement: 'gotta run like a river, you're movin' much too slow'"

• "Get What You Want" - a slow soulful jam, landed on these massive Spotify playlists FRESH FOLK • PULSE OF AMERICANA