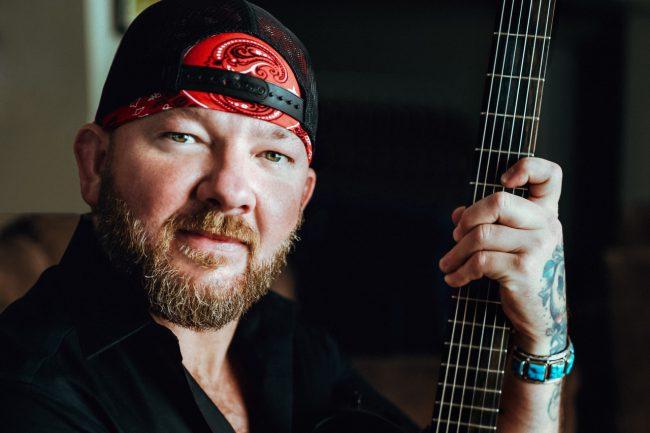 Throw away any preconceived notions you might have about country singers — especially ones from Texas — because Stoney LaRue smashes them all. Over a nearly 20-year career, the Lone Star-born and Oklahoma-raised LaRue has transformed himself into an unlikely Renaissance man. He is a deft songwriter, informed traveler and self-aware philosopher, a troubadour who converses just as easily about Indian yogis and gurus as he does about Texas barbecue and dance halls. LaRue highlights all facets of his complex persona on the inspiring new album Onward.

The title itself is reflective of his outlook on life — if LaRue has a mantra these days, it’s “keep moving forward.” His first album since 2015’s Us Time, Onward captures the husky-voiced singer looking not only ahead, but inward. This is a man unflinchingly shining a light into some dark, uncomfortable corners of his psyche and bettering himself in the process.

“You want to test your bones and see where they break,” he says, dropping one of the many bon mots that pepper his conversation. “This record is wading through all the mud and storms to hopefully come out on the other side with a wisdom that you didn’t have before. It’s a brighter way to look at things.”

Before there can be redemption, though, there must be a conflict, and LaRue dives into that head-first in the album opener “Fallin’ and Flyin’.” One of 10 songs co-written by Onward’s producer Gary Nicholson, the track was famously performed by Jeff Bridges in the 2009 country music drama Crazy Heart. In LaRue’s hands, it’s a humble admission, part of his journey toward self-improvement. “I never meant to hurt no one/I just had to have my way/if there’s such a thing as too much fun/this must be the price you pay,” he sings.

Likewise, he lays bare his soul in “You Oughta Know Me by Now,” a song that Nicholson and his co-writer Shawn Camp wrote especially for LaRue. While it’s framed around a man’s shortcomings and bad habits, it also conveys a precious honesty, like much of the vulnerable Onward does. “Gary told me, ‘You’re getting a chance with this album to show people who you truly are,'” LaRue says. “It might be too blatant for some people, but if you’re that blatantly honest, that’s a direct path to someone’s spirit, you know?”

Forging connections with his fans is paramount for LaRue, who plays more than 200 live shows a year. His base is a fiercely loyal one, and not just within the Red Dirt region. He regularly tours throughout the entire country and has fans in some unexpected places. Chalk up his mass appeal to the way he sells his songs both onstage and on record — to listen to LaRue sing the nostalgic, Bob Seger-esque “Drowning in Moonlight” on Onward is to hear someone with whom you share an experience.

“I thought that song would be something that’s very relatable. You want to think about your first kiss overlooking the city with the top down,” he says. “There’s something so sexy and romantic about that song. It’s dark, but it’s light at the same time.”

LaRue further explores that idea on “Meet Me in the Middle,” a gritty duet about compromise with the legendary Tanya Tucker. “It’s about the idea of reciprocity in a relationship, of yin and yang. You want to think that everything’s supposed to be equal and find the balance, but it never turns out that way, does it? It’s always a shift of power,” he says.

While the bulk of Onward exists in that musical sweet spot of rock and twang for which LaRue has become known, a pair of songs evokes a more Dixieland vibe. “Evil Angel,” featuring the magnificent McCrary Sisters on gospel vocals, is a jaunty barroom piano sing-along, and “Worry Be Gone” — a Nicholson song written with Guy Clark and Lee Roy Parnell — is a New Orleans ode to saying to hell with it all and sparking one up. “We got trouble with the air, we got trouble with the water/ and people ain’t treating one another like they oughta/give me just one more puff of that worry be gone,” LaRue sings.

“It’s all going on around us — from politics to religion — and we think about those things so much that we don’t want to be a part of it,” says LaRue. “As my grandpa used to say, ‘Don’t sweat the petty stuff and don’t pet the sweaty stuff.'”

LaRue pays tribute to his grandparents on Onward by cutting their favorite song: Merle Haggard’s “Let’s Chase Each Other Around the Room.” “They used to dance and drink homemade wine and put on the record,” he recalls. “Of course, us boys would be in there on the piano and the guitars and whatever we could find to make noise with. We’d be just smiling at them, having a blast in their late ages whenever they still could.”

It’s a faithful version of the Haggard and Freddy Powers tune, but one that LaRue still manages to push to the fringe by increasing the tempo and swagger.

Even on the requisite declaration of Texan pride, “Hill Country Boogaloo,” he taps into nontraditional country funk and forgoes lyrical tropes in favor of fresh allusions.

“Everybody throws in Shiner Bock or a ‘Texas wind’ in songs about Texas, but they’re not being specific. There’s too many generalities,” he says. “It’s an homage really. I figured that I’ve been so serious my whole life, let’s take the paint off, see what it looks like bare board and have fun.”

For LaRue, who has sold more than one million albums and singles in his career, fun means being on the road and playing live, tapping into a vast catalogue that includes influential LPs like 2005’s The Red Dirt Album and his exhilarating 2007 live document Live at Billy Bob’s Texas. Now, he’s excited about taking Onward to fans around the country and reminding them that not only is he still here, he isn’t going anywhere.

“You have to be willing to live it. That’s the only way to make it, and the way that I’ve made it,” says LaRue of his remarkable longevity. “But I’m not haphazard in what I’m writing or singing anymore. I’m more focused and looking ahead to what I want to achieve.”

In other words, Stoney LaRue is looking Onward.