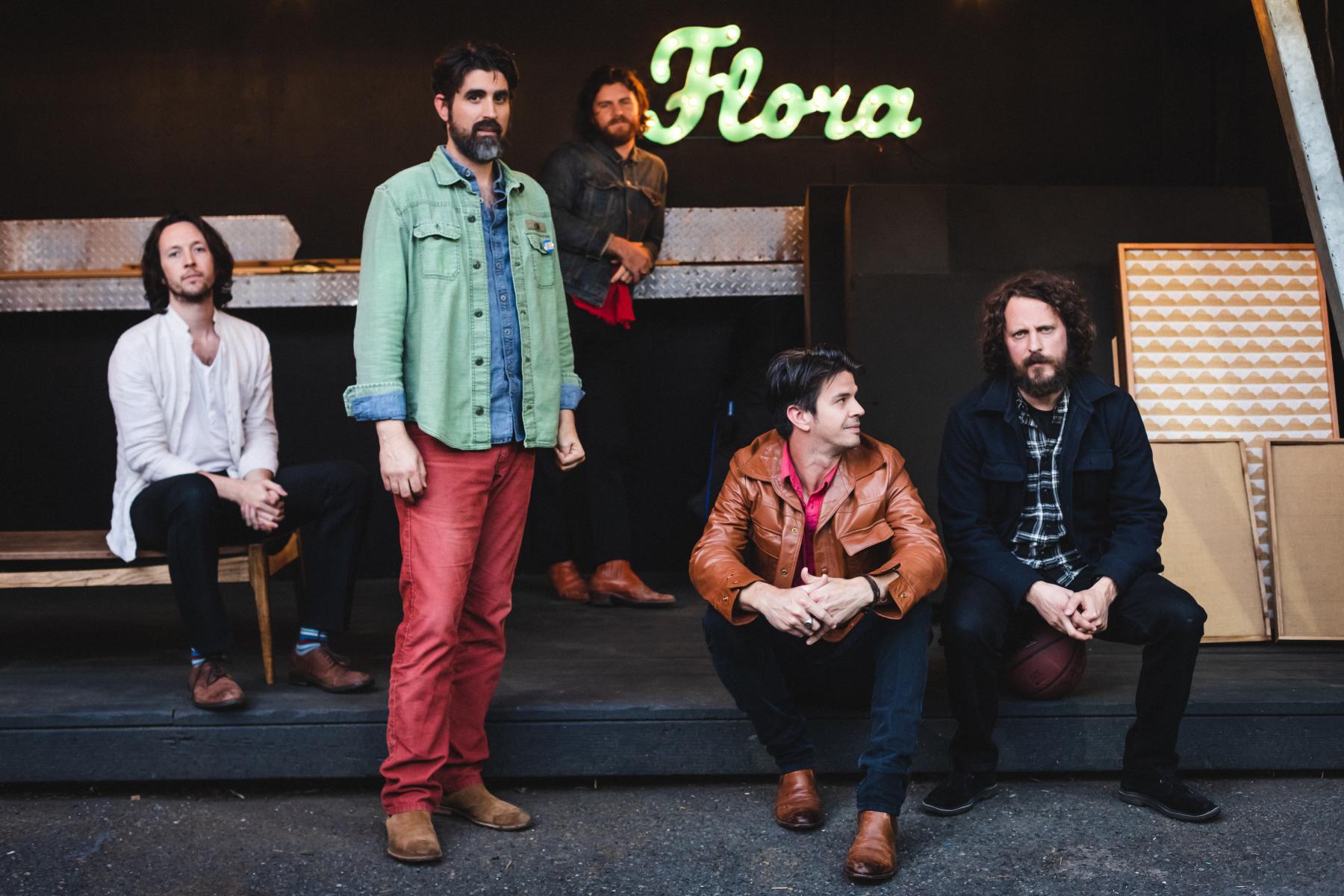 The Band of Heathens with special guest Sam Morrow

The Band of Heathens

When The Band of Heathens decided to dub their sixth studio album of original material Stranger (its first since 2017’s Duende), the veteran band, formed in Austin, TX nearly 15 years ago, had no idea how prophetic that title would turn out to be.

Although the name references the famed existential Albert Camus novel and Robert Heinlein’s sci-fi classic Stranger in a Strange Land, it also touches on the “strangers” who make up the band’s loyal fan base, who supported the band during this period with all touring canceled.

As co-founder Ed Jurdi acknowledges, it is certainly an unusual time to release a new album. “The strangest,” he says. “Maybe no time stranger. Since we started, there have been sweeping, revolutionary changes in the music business, but, in this global pandemic, we’re just a microcosm.”

“We’re really fortunate that we have been able to turn directly to our fan base during the pandemic,” adds fellow co-founder Gordy Quist. “The last few months we’ve spent four nights a week live-streaming personal private concerts to fans, and one night a week publicly live-streaming with the whole band Zooming in from their respective homes in California, Texas, North Carolina and Tennessee. At first it seemed very strange until these walls started coming down and we realized how connected we are by the fabric of music.”

Extending the metaphor of Stranger even further. The Band of Heathens traveled to another city, Portland, OR, with a brand-new producer, Tucker Martine [The Decemberists, My Morning Jacket, Modest Mouse, Camera Obscura], and the result is something different – a more airy, intimate atmosphere, with added emphasis on songcraft and intricate arrangements set in a spacious sonic landscape that reinvents the band’s sound. These are songs stripped of pretense, but teeming with the emotion borne of personal experience, as has been The Band of Heathens’ method from the very start. Stranger moves off into a new place, but still echoes the group’s artful songwriting and multi-layered narrative observations.

Songs like “Vietnorm,” inspired by bassist Jesse Wilson’s stoned viewing of Cheers, noting the arrival of George Wendt’s character Norm, and the rhythmic “Truth Left,” which takes on the politicization of information, enforce the social criticism the band has begun to increasingly tackle in its music, while still striving for inclusivity. The British Invasionby-way-of the Everly Brothers sound of “Dare” examines the notion of “fake news” vs. “good” and “bad” news, while “Call Me Gilded” focuses on how language itself functions to define reality, concluding actions speak louder than words, in love and life.

“With how politically charged the atmosphere has been as of late,” says Gordy, “I’m interested in seeing what happens when you pull a politically-diverse bunch of people out of the social-media echo chamber, and make em sit down and have a beer together over a rock n roll show. Where words fall short, music can be a common point.”

“South by Somewhere” and “Asheville Nashville Austin” each deal in different ways with a favorite topic of The Band of Heathens – life on the road and the pull of home. The former is about reinventing yourself without selling out or chasing trends, while Jurdi describes the latter as dealing with “travel and mobility, but also individual identity.”

The thumping percussion and eerie organ in “Black Cat” takes a real-life podcast tale about the son of a seven-foot Portuguese immigrant to New York City at the turn of the century who helped build the Brooklyn Bridge and later killed a panther with his own hands in an underground cage match and sets it to an expansive, psychedelic tune that creates its own apocryphal universe.

Stranger turns out to be an apt metaphor on both a meta – it’s an apt description of the current world – and personal metaphor in our increased estrangement from one another in silos defined by economy, politics, race or religion.

The album closes with a yin-yang, one-two punch for the current zeitgeist. The Dylanesque “Today Is Our Last Tomorrow” is reminiscent of a woozy “Rainy Day Women #12 and 35,” a rousing rockabilly tune that is BOH’s version of R.E.M.’s “It’s The End of the World As We Know It,” feeling fine in the face of apocalypse now.

“I just remember watching a bunch of news stories, like the California wildfires and border immigration skirmishes,” says Ed. “It seemed like DEFCON 1, and I figured, if we’re going to go out, we might as well party at the same time.”

“Before the Day Is Done” ends Stranger on an elegiac hopeful note. “I was thinking of being present, trying to stay positive,” insists Gordy, who came up with the idea. “And while those two songs are sonically on opposite ends of the spectrum, I like experiencing them back to back there at the end.”

So, while Stranger hits the streets, The Band of Heathens are hoping they’re not far behind.

A 45 date nationwide tour in promotion of Stranger is booked for the fall, but uncertainty in the music industry and re-opening nationwide is a real concern.

“Gordy and I have been doing a lot of personal concerts via Zoom,” says Ed. “We’ve both got a really good audio and video set-up and we’re trying to present as much of a real concert experience as possible.

We’re also researching Drive-in Movie touring. Our nature is to be proactive, but there is a realization that a lot of this is out of our control.”

With their new album, The Band of Heathens have done their part. Now, it's up to the rest of us. Stranger things have happened.

Two years before releasing Gettin' By on Gettin' Down — the most guitar-driven, groove-heavy album of Sam Morrow's catalog, with songs that roll just as hard as they rock — Morrow hit the highway in support of his third record, Concrete & Mud. Despite the 28-year-old being a road warrior for years, this time things felt different. Joined by a band of amplified roots-rockers, Morrow spent eighteen months traveling halfway across the world, playing Concrete & Mud songs to the biggest audiences of his career. By the time the dust settled, he'd become a staple of Americana radio on both sides of the Atlantic, with outlets like Rolling Stone and NPR singing his praises.

Those road miles set the stage for Gettin' By on Gettin' Down, a modern album that revisits — and reshapes — the primordial sounds of hip-shaking rock & roll. These nine songs are rooted in grease, grit, and groove, from the swampy soul of "Round 'N Round" to the funky syncopation of "Rosarita" to the hook-laden rock of "Money Ain't a Thing." There's hardly an acoustic guitar in sight; instead, amplifiers and guitar pedals rule the roost, with everything driven forward by percussive rhythms that owe as much to R&B as country music. Written and recorded in the wake of Concrete & Mud's acclaimed tour, Gettin' By on Gettin' Down doubles down on the electrified fire and fury of Sam Morrow's live shows, with a road-ready band joining him on every song.

This is the sharpest songwriting of Sam Morrow's career, rooted in a mix of autobiography and wry social commentary. Gettin' By on Gettin' Down is an album that focuses not only on what its frontman says, but how he says it.

"My favorite rock & roll is the stuff that has groove to it," says Morrow, a native Texan who kickstarted his music career after moving to Los Angeles, where he's since become one of the city's biggest roots-music exports. "I want to make music like that — funky, layered rock where it's not just the songwriting that's important, but the presentation, too."

To find the right presentation, Morrow turned to drummer Matt Tecu, whose versatility as a percussionist had landed him a spot in the documentary Echo in the Canyon, backing up West Coast icons like Jakob Dylan, Brian Wilson and Neil Young. The two had spent months on the road together, touring their way from coast to coast, steadily growing Morrow's sound into something that nodded to — but was no longer defined by — the country music he'd grown up with. Looking to funnel the spirit of those concerts into a studio recording, Morrow asked Tecu to send him a series of drum beats, which the frontman then turned into songs with help from co-producer Eric Corne. The grooves served as building blocks for the music that followed, anchoring Gettin' By on Gettin' Down in a rhythmic, full-bodied sound whose mix of country, rock, and funk influences nodded to Morrow's genre-bending heroes: Little Feat, Los Lobos, Queens of the Stone Age, and even David Bowie.

While recording the album at an L.A.-area studio owned by The Doors' guitarist Robby Krieger, Morrow and Corne embraced their experimental side, focusing on layered arrangements that were as unique as the songs themselves. They added a T. Rex-worthy, fuzz-rock riff to the title track. They punctuated "Rosarita" with a slide guitar wrapped in wah-wah wooziness. They filled "Round 'N Round" with blue notes and swung swagger. Over six days, they pieced together the Gettin' By on Gettin' Down tracklist, with help from guest musicians like guitarist Doug Pettibone and bassist Taras Prodaniuk, both veterans of Lucinda Williams' band. The result is a record that builds a bridge between Morrow's command as a frontman and bandleader — a record, in other words, that pairs sharply-written insight from a songwriter at the top of his game with the raw, rocking slash-and-burn of a band stocked with roots-music heavyweights.

Touring the world will widen your perspective. Morrow still shines a light on his own experience with Gettin' By on Gettin' Down, whose songs spin true-life stories of new relationships, old flames, the battle to remain upbeat during downtrodden times, and the lingering temptation of the vices that once clouded his vision. He switches to a wider lens on several songs, though, penning lyrics about a modern world obsessed with Instagram filters and virtual interactions.

"I'm taking my own flaws, and flaws we have socially, and poking fun of them a bit," he explains. "I've been known to have songs that are really serious and grim, but that's not exactly who I am. I've just always had an aversion to doing what everyone else is doing. It's this punk-rock attitude, where if you tell me I'm supposed to do something specific, I'm gonna do something else. Maybe that's a character defect…but it is what it is."

It's no character defect. With Gettin' By on Gettin' Down, Sam Morrow reminds us that the things that set him apart are the very same things that help him stand out.