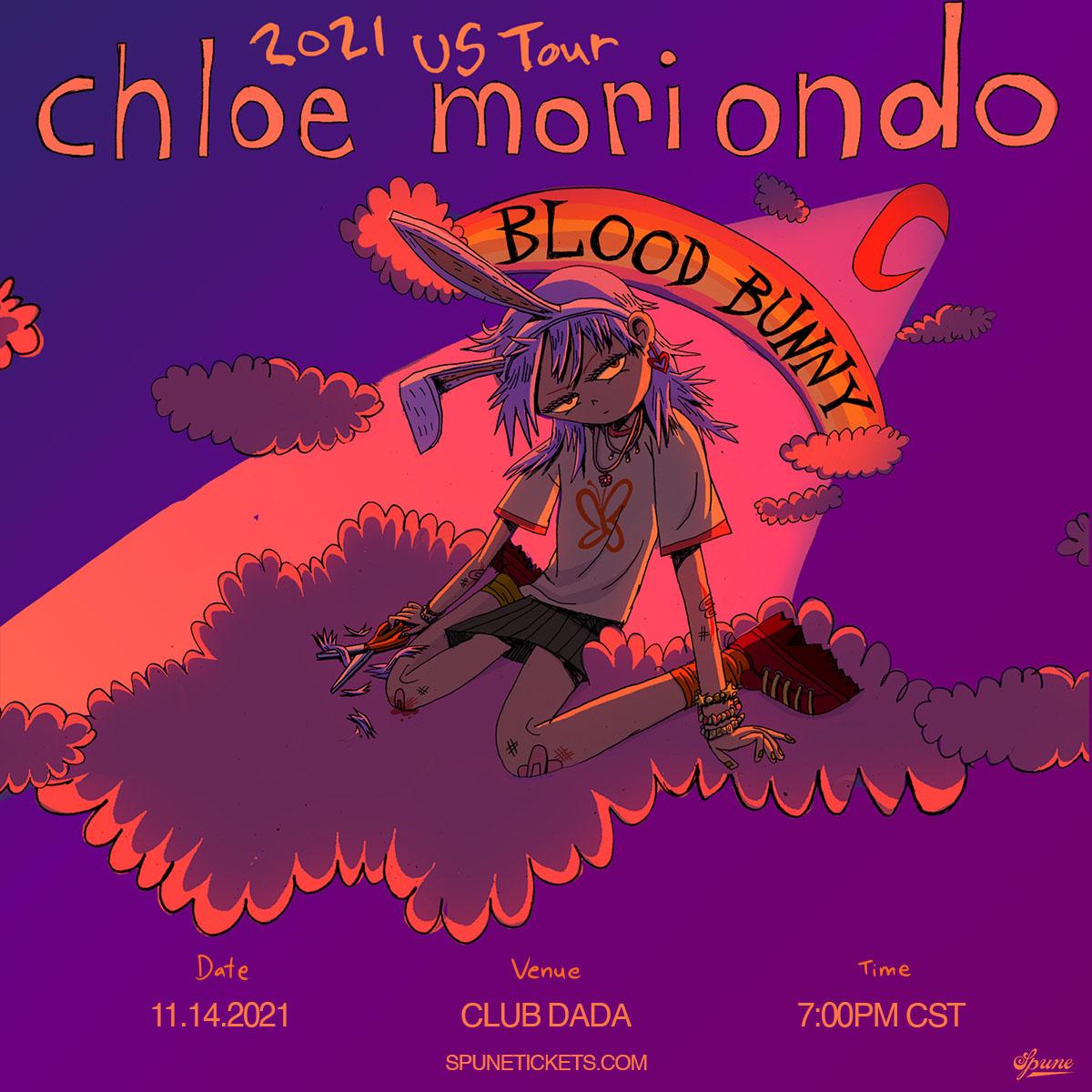 On her sophomore album Blood Bunny, singer/songwriter Chloe Moriondo puts her fantastically warped inner life on full and glorious display. With both intense specificity and idiosyncratic humor, the 18-year-old artist opens up on everything from hopeless crushes to gory revenge fantasies to the many elaborate thoughts that endlessly run through her brain (whether or not to shave her head, the boredom of the suburbs and the longing to escape, her undying love for Paramore and Girlpool, the freakishly large wingspan of manta rays). In that unchecked sharing of her obsessions and frustrations and deepest anxieties, Moriondo arrives at a body of work that’s bitingly honest yet tenderhearted, a lovingly delivered offering to the fellow weirdos of the world.

“I wrote more honestly on this album than I ever have before,” says Moriondo, who first started writing songs as a little kid in Michigan. “I think it has to do with becoming more honest with myself in general, especially since graduating high school, and really figuring out what I actually care about and what I want to express in my music.”

As a happy outcome of that newfound clarity, Blood Bunny more brightly illuminates the landscape of Moriondo’s ultravivid imagination. To that end, the album’s deceptively breezy lead single “I Eat Boys” pays brilliant homage to the queer cult classic Jennifer’s Body, twisting an instance of street harassment into a cannibalistic daydream (“I’ll eat you whole/Pull out your teeth and take your soul/Stir some blood into the punch bowl”). “I wrote that song as a way to vent my hatred for the percentage of the male population that is terrible,” Moriondo notes. An equally potent burst of angst, the album-opening “Rly Dont Care” unfolds as a wildly cathartic anthem for anyone who’s ever been the recipient of unsolicited commentary or advice. “There’s a lot of people online and in the world in general who feel the need to tell me their opinions on things that don’t really matter much, like my hair or piercings or tattoos,” says Moriondo. “Most of the time I just want to respond by telling them, ‘I don’t care’—but instead I wrote a song that will hopefully encourage other people to do whatever they want to do.”

While Blood Bunny has its share of explosive moments, the album also finds Moriondo documenting her emotional experience with a delicate balance of dreamy sensitivity and painful self-awareness. Built on a kinetic back-and-forth between stripped-back verse and soaring chorus, “I Want To Be With You” begins in shy self-consciousness (“Swimming in my T-shirts, no matter the weather”), soon arriving at a sweetly poetic expression of affection (“You shut my mouth/And you buckle my knees”). On “Bodybag,” Moriondo muses on the strange phenomenon she refers to as “that feeling when you’re attracted to someone, but you also kind of hate them,” channeling that turmoil in her charmingly unhinged lyrics (“Wanna kiss you on your cheeks/But I also wanna punch your teeth”). And on “Slacker,” Blood Bunny drifts into a melancholy mood, setting her heavy-hearted introspection to a backdrop of hazy textures and languid beats. “‘Slacker’ is about feeling like you just dropped the ball on something that could’ve been so good, if only you’d done the right thing,” Moriondo says. “I wrote it when I was going through a weird time and it helped me to feel better about everything, and now it just feels really sweet to sing.”

On the album’s closer, Moriondo presents another song born from her attempts at self-soothing, the beautifully slow-building “What If It Doesn’t End Well.” “The only real fear I’ve ever had in life is the fear of losing the people I love,” she says. “That song came from me writing about the anxiety I felt about the world and my relationships and my friendships and my family—I was trying to find some comfort, and it worked out pretty well.” Fueled by a powerful vocal performance from Moriondo, the result is a soul-baring epic that closes out Blood Bunny with an invaluable question: “When the world is over and we go under/Would you still be mine?”

Like several other songs on the record, “What If It Doesn’t End Well” includes vocal takes Moriondo captured while sitting in her car in the parking lot of a nearby church she attended as a child. Growing up in a suburb of Detroit, the lifelong music obsessive got her start singing as a little girl and took up guitar and ukulele by the time she was 12. “I’ve always been surrounded by music, so it felt like there was never really another option for me as far as what I’d do with my life,” says Moriondo, whose parents raised her on bands like Metallica and the Misfits and Green Day and Queen. At the age of 13, she’d begun posting covers on YouTube and SoundCloud, first gaining serious traction with a Rex Orange County song she impulsively recorded after finishing up a choir recital. As her following expanded, Moriondo started posting her original material, beginning with the gently heartbreaking “Waves” (a song she’d written while on vacation in Puerto Rico with her family and her best friend). Released two months before she turned 16, Rabbit Hearted. featured “Waves” as its opening track, and soon led to such milestones as touring the U.S. and Europe with Cavetown and landing her deal with Fueled By Ramen in 2019. With her recent accolades including appearing on the “Essential Emerging Artists for 2021” list from NME (who hailed her as a “YouTuber-turned-bedroom pop revolutionary”), Moriondo has also earned acclaim from leading outlets like the New York Times (who praised “I Want To Be With You” as “acutely observed bedroom pop…served with a side of arena-emo triumph”).

In the making of Blood Bunny, Moriondo approached her songwriting with a greater level of self-assurance than she had ever felt in the past. “I’ve gotten better at getting down my song ideas before I can stop myself and say, ‘No, that sounds stupid, never mind,’” she reveals. “Now I just go ahead and write it, and save the filter for later.” By way of example she points to “Manta Rays,” a softly hypnotic track made even more mesmerizing by its stream-of-consciousness confession (“My therapist will tell me that it’s best to let it be/But I wanna light fires, I wanna explode/I want to be everything you want to know”). “I was nervous as hell about showing that song to anyone, but I ended up doing it anyway, and I love the way it turned out,” she says. “There are so many things on the album that I never imagined myself being able to make, and now I just want to keep experimenting and collaborating and see what else I can come up with.”

By overcoming that self-doubt and embracing more boldness in her music, Moriondo has ultimately doubled-down on her intentions as an artist. “I’ve always been a little weird, a little morbid and a little too excitable, and I think that definitely translates into my songs,” she says. “Ever since I started writing I’ve felt the need to share as much as myself as I can, so that people who feel the same way might find some kind of comfort. I hope when people hear this album it’ll be refreshing to them, and help them feel better about themselves and maybe stop caring about what other people think. I hope it helps them know that being weird is actually a good thing.”