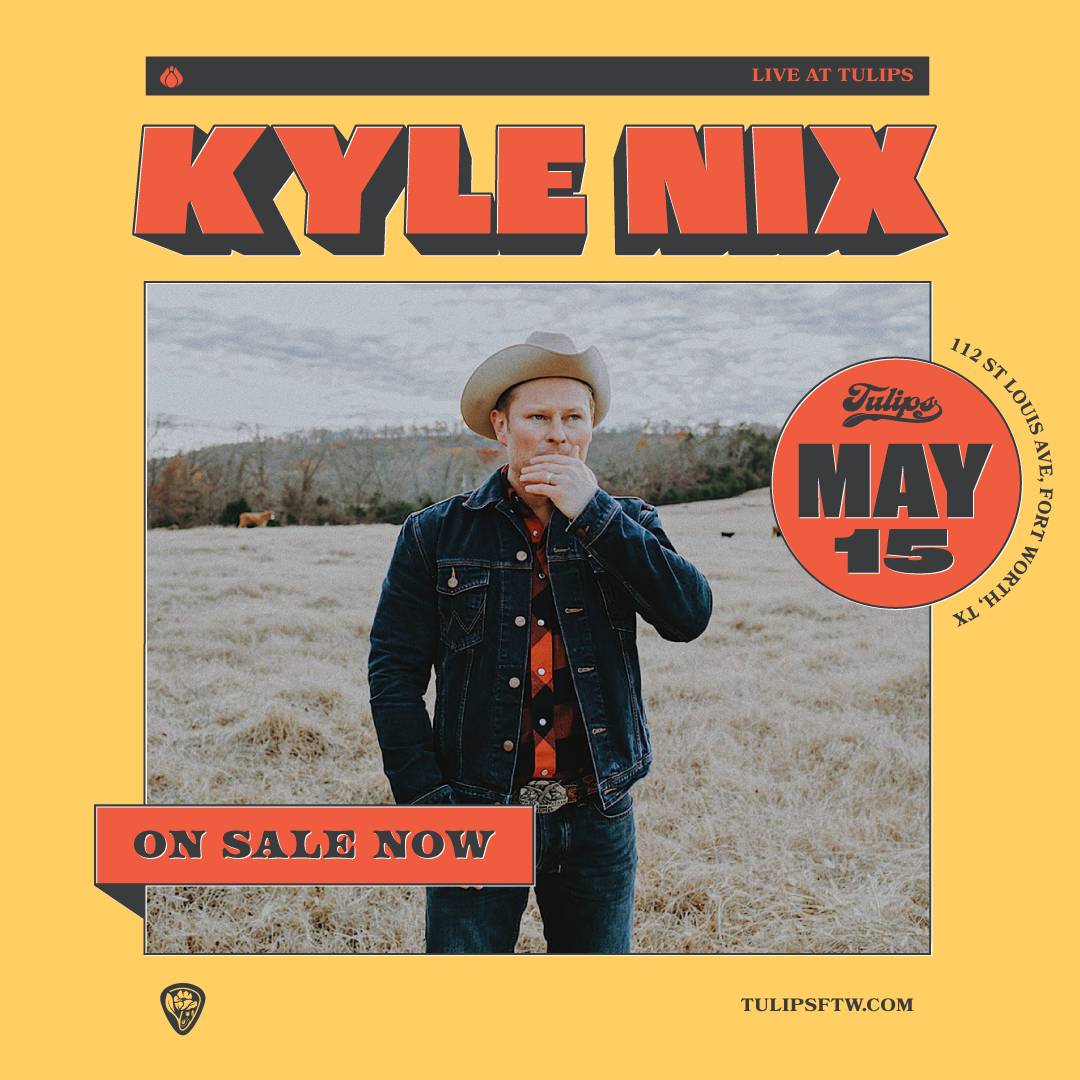 Tulips Fort Worth welcomes Kyle Nix on Saturday, May 15!

After years of playing fiddle with the Oklahoma-based country outfit the Turnpike Troubadours, Kyle Nix has emerged with a new role on his debut solo album, Lightning on the Mountain & Other Short Stories. You will hear most of the Troubadours roaring as his backing band on the record but this isn’t an uninspired spin-off or half-baked reboot of a good thing.  Lightning on the Mountain has an identity entirely it’s own- a western-inspired collection of literary songs, which tell stories from Nix’s own history as well as of the many unique characters he “may or may not have encountered” throughout his years on the road.

Originally from Perry, Oklahoma, Kyle Nix grew up literally surrounded by musical instruments.  His grandfather was a carpenter and part-time fiddle maker. “As a kid, the fiddles were off limits because they were breakable, delicate... that just made me want to mess with them more”, he laughs.  Eventually, though, he got his hands on the instrument and began taking lessons in Enid, Oklahoma from bluegrass fiddler Shirley Landrum. “I was lucky that my parents were willing to drive me around to lessons & bluegrass festivals. It really helped fan the flame”, he remembers.

Nix’s involvement with the Turnpike Troubadours was an entirely organic process.  The band had just formed when he happened to run across Evan Felker and RC Edwards at a co-billed show. “I remember thinking, ‘man I really like what they’re doing. I should probably be doing that, too!’” he laughs.  Not long after that, Kyle, Evan and singer-songwriter Clint Osmus moved into a house a stone’s throw away from Oklahoma State University campus in Stillwater, Oklahoma. They played music as often as they could, usually only pausing to go to work. Eventually, Nix quit the band he was a part of and joined up with the Troubadours.  It was during this time that he fell in love with songwriting and was inspired to write more of his own tunes.  “It was around those guys that I first heard John Prine and Townes Van Zandt songs. I remember thinking, ‘Wow, I’ve been missing out on alot’” Nix says. “It really lit a fire inside me. I wanted to learn how to tell a story like those guys”

He says of the album’s theme, “I’ve really gotten into short stories these past few years. You have to sum your ideas up quicker- really trim the fat.  I like what they do”.  With that in mind, he wanted to treat his album as a series of short stories; all encompassed by a Spaghetti Western theme.  “I’m into Ennio Morricone (composer). He composed a ton of classic western soundtracks. On the record I applied the “spaghetti western” theme with instrumentals to imply a front cover, a back cover & picture pages… a short story collection”.

Although Nix’s gritty, driving fiddle playing is not to be missed, he has shown a whole new side of his musicianship with Lightning on the Mountain & other Short Stories.  Profound moments of everyday life are framed with fierce, no-nonsense country drive and polished with a cinematic touch.  Now that Nix has shown all his cards, it may be hard for him to return to his  role as exclusively a fiddle player, and there is no doubt that this album is merely the tip of the iceberg with regard to his writing and singing chops.