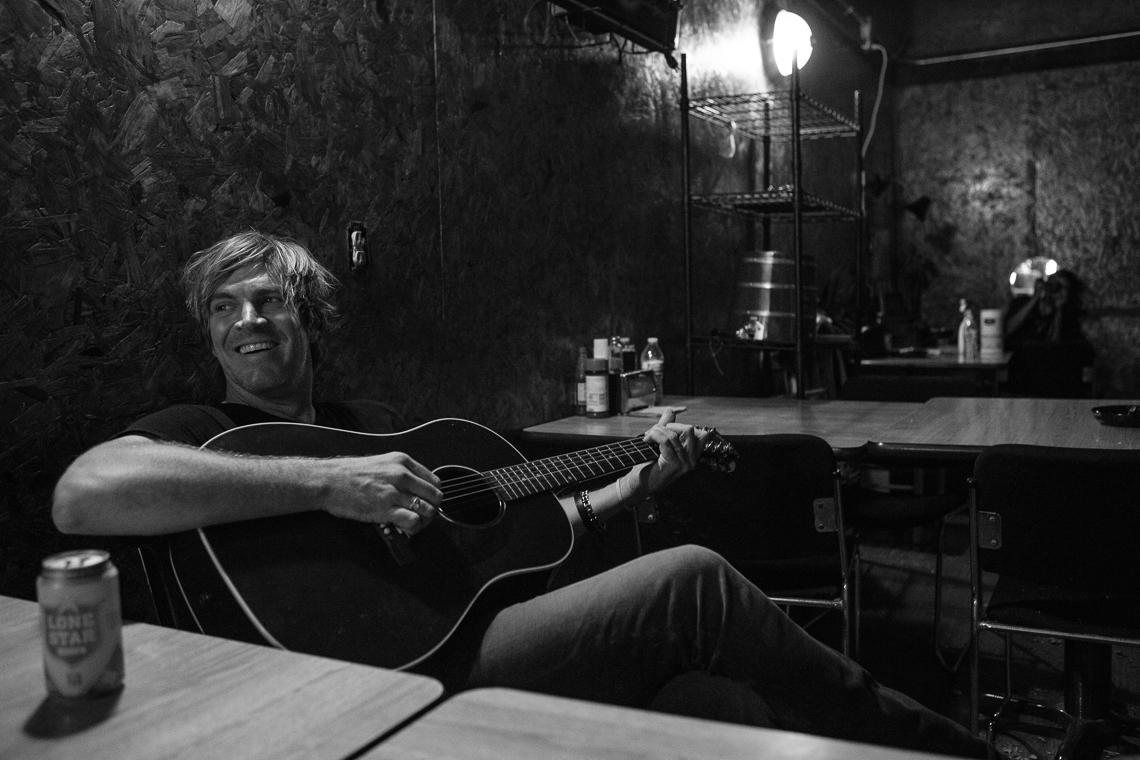 Throughout a recording career that has spanned more than 20 years, Jack Ingram has maintained a reputation for uncompromising, personally charged song craft and energetic, charismatic performances, earning him prominent stature in a prestigious tradition of iconoclastic singer-songwriters. Ingram’s prior work has won him a fiercely devoted fan base as well as reams of critical acclaim, and now Midnight Motel marks a creative milestone for the veteran artist, his sound ever evolving while showcasing some of his most expressive, emotionally raw songwriting to date.

Ingram made Midnight Motel independently to avoid outside influences and have creative freedom to write and record. “It was really important to me at this point in my life to avoid thinking about any commercial decisions about the music,” explains Ingram. “Every night after my kids went to bed, I’d go into my music room and stay in there until about three or four, just working out the songs like I did at the beginning of my career. Or while on the road, sit up late at night writing in motel rooms. I wanted to bring people into that space with me.”

And so Midnight Motel turned into an album that is as real and honest as it could be. “Signing with Rounder Records to release this album was a perfect fit because of their expertise and love for good music, no matter the genre,” Ingram says.

His eighth studio album, and his first since his 2009 smash Big Dreams & High Hopes, Midnight Motel features spare, stripped-down instrumental arrangements that highlight the intimacy and urgency of such new originals as “I’m Drinking Through It,” “Nothing to Fix,” “Can’t Get Any Better Than This,” and “All Over Again.” The album’s organic late-night vibe is perfectly suited to the material, and brings out the emotional edge in Ingram’s deeply felt vocals.

“I couldn’t have made this record when I was 25, because I just didn’t have the experience then,” he asserts, adding, “It’s kind of a concept record, but it’s a loose concept. There’s the late-night thing, and the travel, and then there’s the concept about not letting go of the important relationships, even if they’re not working. These songs are all about loving, troubled longterm relationships, whether it’s with the music business or my wife or my family.”

The road to Midnight Motel has been a long and sometimes rocky one for Ingram, who was named Best New Male Vocalist by the Academy of Country Music in 2008, despite the fact that he’d already been rocking honky tonks, theaters, and stadiums for a decade and a half by then. He began writing songs and playing gigs while studying psychology at Southern Methodist University in Dallas, and quickly earned a rabidly devoted audience while performing high-energy live shows in bars and roadhouses throughout his home state.

Ingram’s remarkably loyal fans enthusiastically embraced his early, independently released albums Jack Ingram, Lonesome Questions, and Live At Adair’s. His indie success helped to win him acceptance within the Nashville major-label mainstream, and he expanded his constituency with such acclaimed national releases as Livin’ or Dyin’, Hey You, Electric, Young Man as well as the live albums Live at Billy Bob’s Texas, Live at Gruene Hall: Happy Happy, and Acoustic Motel.

Ingram moved to the Big Machine label with 2006’s Wherever You Are, which spawned a pair of major country hits in the title track, which became his first Number One single, and its Top 20 follow-up, “Love You.” His next studio effort, 2007’s This Is It, hit the Top Five on the U.S. country charts and produced a trio of hits in “Lips of An Angel,” “Measure of A Man,” and “Maybe She’ll Get Lonely.” Big Dreams & High Hopes followed two years later, spawning five chart singles, including the Top 10 “Barefoot and Crazy” and the Top 20 “That’s A Man.”

For Midnight Motel, Ingram was looking to create something different. “Something inside me was itching to do this,” he recalls. “The pressure in my chest was just so heavy that the only way I could get it off was to write these songs. Frank Liddell, who produced my record Electric in 2001, gave me some great advice: he said, ‘Go away and do something great while no one’s looking.’ That became my motto for this project. I just decided that I was just gonna do the best work I could do, and have it take as long as it takes. I didn’t care about trying to be technically perfect; I just wanted to be emotionally available. I can honestly say it was the best recording experience I’ve ever had. The waters got rough, but I really had a ball and enjoyed navigating that course.”

Rather than shooting conventional music videos to promote Midnight Motel, Ingram and noted filmmaker Michael Tully (Ping Pong Summer, Septien) have created a short companion-piece film incorporating the album’s songs and featuring Ingram as a troubled troubadour. The short film was screened at both the Dallas International Film Festival and the Nashville Film Festival.

Magic happens when everything comes together like it's supposed to -- when the joys and the pain, the triumphs and the missteps all click into place to be seen for what they truly are. Waylon Payne's Blue Eyes, The Harlot, The Queer, The Pusher & Me (releasing 9/11/20 via Carnival Recording Company / Empire) is such a moment, the culmination of an extraordinary journey set to music.

A son of country music royalty, a teenaged Baptist preacher turned addict and actor, Payne sings about fathers and sons, faith and addiction, recovery and renewal with devastating clarity. His character-rich collection harks back to a way of telling stories in song that revealed kept secrets and promised mystery. Over his years, Payne has felt the terrible power secrets can hold and learned the transformative value of releasing them. Finally, he's in a place where he can harness that power to create transcendent work.

Payne recorded Blue Eyes, The Harlot, The Queer, The Pusher & Me primarily at Southern Ground Nashville, a converted century-old church building just off Music Row that once housed Monument Studios. Payne's mother, country singer Sammi Smith, cut her iconic version of Kris Kristofferson's "Help Me Make It Through the Night" at Monument. When Payne recorded his vocals, he says, "I stood in the same spot she stood and sang while she was pregnant with me."

As a result, Blue Eyes, The Harlot, The Queer, The Pusher & Me sounds both timeless and out of time. It exists in music's liminal spaces, the way the late '60s and early '70s albums of Kris Kristofferson and Bobbie Gentry did in their day. "Bobbie's my songwriting hero, the reason I do what I do -- her and Kris," Payne says. "When my family threw me out, I picked the toughest motherfucker I could think of and modeled myself after him. I learned how to be a man watching Kristofferson."

Like those artists, Payne draws from tradition while stretching beyond any notions of the mainstream, ultimately standing apart from everything else.

Payne has come a long way from the first time he and Liddell met back in the '90s when Liddell worked for Decca Records. Payne showed up at Liddell's office, unannounced, declaring his intentions to become a country star. It was the same sort of bold approach Tammy Wynette had made walking in on Billy Sherrill about a block away and 30 years before, and, like Wynette, Payne hadn't brought any songs to bolster his case. Still, Liddell found Payne's combination of raw talent, personal magnetism, and determination compelling, even if it still needed to be focused.

Payne eventually figured out how to harness those abilities, releasing his first album and launching an acting career that included portraying Jerry Lee Lewis in the 2005 Johnny Cash biopic Walk the Line and Nashville guitar legend Hank Garland in 2008's Crazy. At the same time his career seemed to be coming together, though, a drug problem that had started in his teens was developing to a full-blown meth addiction that was ripping Payne's life apart. "I was acting like a spoiled rock star," he says. "By the time I started making movies, my ego was a little out there. Then you add meth to that, and you turn psychotic without realizing it."

Now eight years clean, Payne finally can put all the elements of his life in their proper place. Blue Eyes, The Harlot, The Queer, The Pusher & Me testifies to a decade-long journey, capturing songs and moments from his most troubled time, as well as the grace and the relationships that led him out of it.

There's tenderness to these songs, an empathy for lost souls who may or may not find their way home. Payne wrestles with the legacy of family dysfunctions in songs like "Sins of the Father" and "What A High Horse." A pair of poignant vignettes, "Shiver" and "Old Blue Eyes," team with tragedy and chilling beauty. "There are jewels buried deep in the record, and if you're a junkie, you'll catch them," Payne says.

He views "Dangerous Criminal" as his point of reckoning. "It's basically me admitting I have a problem," he says. "I am a person who will get himself into trouble and in danger unless I keep myself in check."

"After the Storm" and "Precious Thing" play like prayers, while "Santa Anna Winds" was written as a lullaby for the young boy whose voice is the first thing heard on the album, a child Payne views as almost a son and by whose first birthday he marks his sobriety. Payne also recorded his own version of "All the Trouble," the GRAMMY- nominated song he wrote with Lee Ann Womack and Adam Wright and which Womack recorded for her 2017 album The Lonely, The Lonesome & The Gone. Payne's talent as a songwriter has also been recognized by artists Ashely Monroe, Miranda Lambert and Wade Bowen, who have chosen to record his songs.

Payne may have recorded Blue Eyes, The Harlot, The Queer, The Pusher & Me in Nashville, but it started a decade ago in Texas, as he came through the worst of his addiction and got clean with the help of family and friends there. "For a while, I couldn't even write," he says. "I couldn't put thoughts together, because I had really fried my brain. Once I got sober, everything came."

For Payne, each song reflects a different situation in his life. Together, though, they tell of a prodigal son returning home -- not to the family of his birth, but home to the true self he'd once nearly abandoned.

"The essential DNA elements of this record are my self-written confessions and pleas for forgiveness," he says. "It all revolves around me getting right with myself and the universe. Maybe I still am a preacher in a way -- I just channel into what's supposed to be."