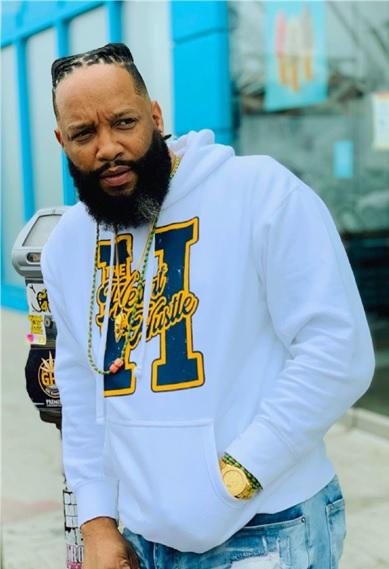 Houston native Jack Freeman (born November 8, 1988) is an American singer with a voice and a message of love. His sultry yet smooth style has been honed by artists such as Donny Hathaway, OutKast, John Legend, D’Angelo, Bilal, Chaka Khan and Scarface just to name a few. While looking up some of the industry’s greats, Jack has also had the opportunity to open for the likes of Bilal and John Legend as well as Anthony Hamilton, Maze featuring Frankie Beverly, Brian McKnight, PJ Morton, Phife Dawg and Tito Jackson.

In 2016 Jack Freeman was interviewed for the Radio One Black Music Month Feature with Joe where he shared his views for the future of Black music. That same year he was selected by John Legend as a member of The AXE Collective which encourages emerging artists to find their magic. And in 2014 he was voted by fans in Houston as 97.9 The Box’s Artist to Watch. Further contributing to his hometown notoriety, Jack was enlisted to collaborate on projects with rappers Scarface, Killa Kyleon and Le$.

When asked how he would like to influence others with his music, Jack had this to say:

“I want my music to influence people to love through all of the things going on around them; to find something, or someone, and love it with everything you’ve got.  I’d also like to provide the soundtrack to what people feel. Lots of people feel things but can’t find the words. I want my music to be those words.”

Born in NJ, raised in NC, rumor has it or at least her mother has said, that Naneezy was speaking and singing before she could walk. Being the positive and supportive mother that she is, her mom ran with it and bought Naneezy a toy microphone and speaker.

That is where her musical journey began: joining a band in middle school, singing in the church choir and women’s ensemble in high school, to open mic nights and Battle of the Bands.

Naneezy has always written poems. She started creating lyrical music in high school. She recorded a song called, ‘Dreams’, which to this day, is a personal favorite of hers, holding a special place in her heart.

Many doors have opened for her, and Naneezy is thankful for the people who have pushed her to perform, and for the people placed in her life, navigating her towards bigger opportunities.

Naneezy never thought anyone would hear her songs, apart from family, friends, and fellow- artists. However, now Naneezy wants the entire world to hear her music.

Naneezy is not into creating music containing profanity or any profane references, because she loves the kids. She realizes that music crosses age-lines and should thus be void of negative lyrical content. She believes in uplifting youth through her music, as opposed to suggesting any negative behavior.

Naneezy won Battle of the Bands between ECU, NC State and UNC. With that win, she was selected as the opening act for Ari Lennox and Smino.

Naneezy is looking forward to her journey and growth as an artist, and as a person.

Amsterdam soulful/nujazz singer, songwriter and performer Rebekka Ling has been musically active in and outside the Netherlands for many years. In June ‘12 the emerging artist released her first solo album 'Travel light' which came out on indie label Phoenix Wood Records.The album showcases the versitile and fresh sound of this creative spirit.

' Travel Light ' is a mix of NuJazz, Neo-Soul with influences from Hip Hop, broken beat and electronic music. The songs have a positive feel with a whimsical sound. The album was released on iTunes and Spotify as well as physical in several record stores in the Netherlands. Rebekka Ling gave her official release party with full band in the North Sea Jazz Club in Amsterdam. After her first album she released several singles recorded at the Red Bull Music studios in Amsterdam. After that she has been working on new material (her latest single 'Be Alright' that was globally well received) together with band members and producers bassist Glenn Gaddum jr. (Frank McComb, Matt Simons) and drummer Jamie Peet (Niels Broos & Jamie Peet), and has done different collaborations as well.

The Amsterdam artist grew up in a musical family with a mother who sang and every family member practicing an instrument. Her musical background is broad and includes gospel, soul/jazz and rock music from the 60/70's. Rebekka studied classical and jazz flute for more than seven years, however, singing proved to be her true love.

She started as a featured vocalist for hip-hop formation The Proov on their EP and subsequent album ' Traditions ‘. Within a short time, Dutch R&B singer Berget Lewis asked Rebekka at a jam session to join her tour as a backup singer.

Rebekka Ling chose to study jazz at the conservatory of Amsterdam. While meanwhile working with different bands and national/international artists, such as Benny Sings and Sandra St. Victor.

During conservatory she met her musical team and they started working on own music. With a unique live band of top musicians, in where improvisation and creative freedom is an important factor that will take you to a higher level, Rebekka performed at different jazz festivals and pop venues in Holland, was support act for singer Jose James and her music is broadcasted on jazz radio stations such as Sublime FM and Radio 6 Soul & Jazz. Established music blog Soulbounce has picked up on the artist early on.

Rebekka is influenced by the soul Legends Marvin Gaye and Donny Hathaway, the jazz legends and contemporary artists like Jill Scott, The RH Factor, Bilal, D'Angelo and Robert Glasper.

'Travel Light' was also re-released in Japan on CD in august including live bonus tracks and available in stores in Tokyo.

Music has been an important, comforting and natural part of her life ever since she was a young girl. Still Rebekka Ling has developed a fresh and authentic sound over the years. Making a soulful connection through music, uplifting her listening audience by creating and playing live is what drives her as an artist.

Indigenous American - Dominican Heritage Nuwamba; a Dallas native has uplifted many souls worldwide since the early '90s, releases his new album 'Love Ase' presenting his feature single 'To The Light'. on the 6th of August. Available on all streaming platforms. The essence of the album "Love Ase" is a choice to live in the now, ever knowing the virtue that's revealed in the present will always overshadow the dramas of yesterday.

When asked about the track, Nuwamba says "I hope this song announces the awakening one has as self-awareness begins illuminating the focus required to maintain balance in life; encompassing food and nutrition to physical health and overall wellness. Defining the clarity of light and dark the known and the unknown, obtaining all without fear and knowing they are necessary to experience a virtuous life."

Nuwamba's sound is inspired by an eclectic style of music; fusing African drumming, Latin rhythms and hip hop beats with indie soul R&B vocals. With his debut album 'Above the Water', Nuwamba was named "The Best Hip Hop and R&B Artist of the year 2005" by the Ft. Worth Weekly. Nuwamba has performed alongside acclaimed artists Like Erykah Badu, Usher, Bobby Blue Bland, Raheem Devaughn, Eric Roberson, UGK and many more. He has aired on radio stations in Africa and Brazil as well as videos on MTV and charted on Billboard.

Dewayne is the leader and founder of Faces The Band, a high energy gospel jazz band that has graced the stage with some of the greatest musicians on the planet, including the Grammy award winning saxophonist Kirk Whalum.

In these troubled and difficult times, it's normal to look back to some perceived Golden Age when things were, well, a lot better than now. Never mind the pandemic, how often do we hear people saying that movies, TV, music, going out and life in general used to be so much better and that damned virus has magnified the sentiment.

Young and smooth RnB\Soul man IshMaleSings has tapped into that very sentiment with his latest record... 'Gimme Sum R&B'- a lovely, lithe tune with a sweet vocal weaving its way through some soulful sax riffing.

IshMale currently resides in Dallas, Texas though he was born in Shreveport, Louisiana, where he learned the soul singer's craft. He debuted some years back but though winning plenty of live work in places like Las Vegas, chart and radio success eluded him. He knows it's tough these days for indie artists. However, his nostalgia-laden 'Gimme Sum R&B' might just be his breakthrough track. It's already made waves stateside in the United Kingdom, and it's easy to hear why. It's easy to the ear, slinky and soulful... and, as we alluded to up top, it taps into that rich vein of nostalgia. Why, it even comes in "parts 1 and 2" - just like plenty of those great old records of yesteryear!

Nostalgia! Who said there's no future in it! 'Gimme Sum R&B' might just secure a great future for young Ishmale Sings.

IshMaleSings' long-awaited album, 'A HEARTS' JOURNEY' is set to be released on September 4th, 2022.