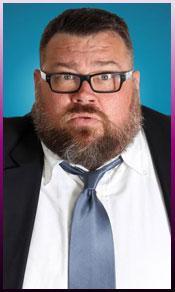 Likeable, laughable and liable is what Daryl Felsberg is. After being on the road for over 10 years now, he has honed his comedy voice into a character that the industry and fans alike are taking notice of. In 2009, Daryl produced his album “BadFattitude” selling nationwide, while getting airplay on XM / Sirus Comedy. That same year Daryl was tapped to be the host of “The Shopper’s Club”; a shop-from-home show on a regional cable network. Daryl was yanked off the air after only 3 months for mocking the clients and their products, although viewership was at an all-time high. Daryl is recognizable from many commercials and voiceovers. His rants on obesity and society, and the absurdities of everyday life, keep audiences laughing and on guard. From stage to TV, the only thing bigger than he is... are the laughs.