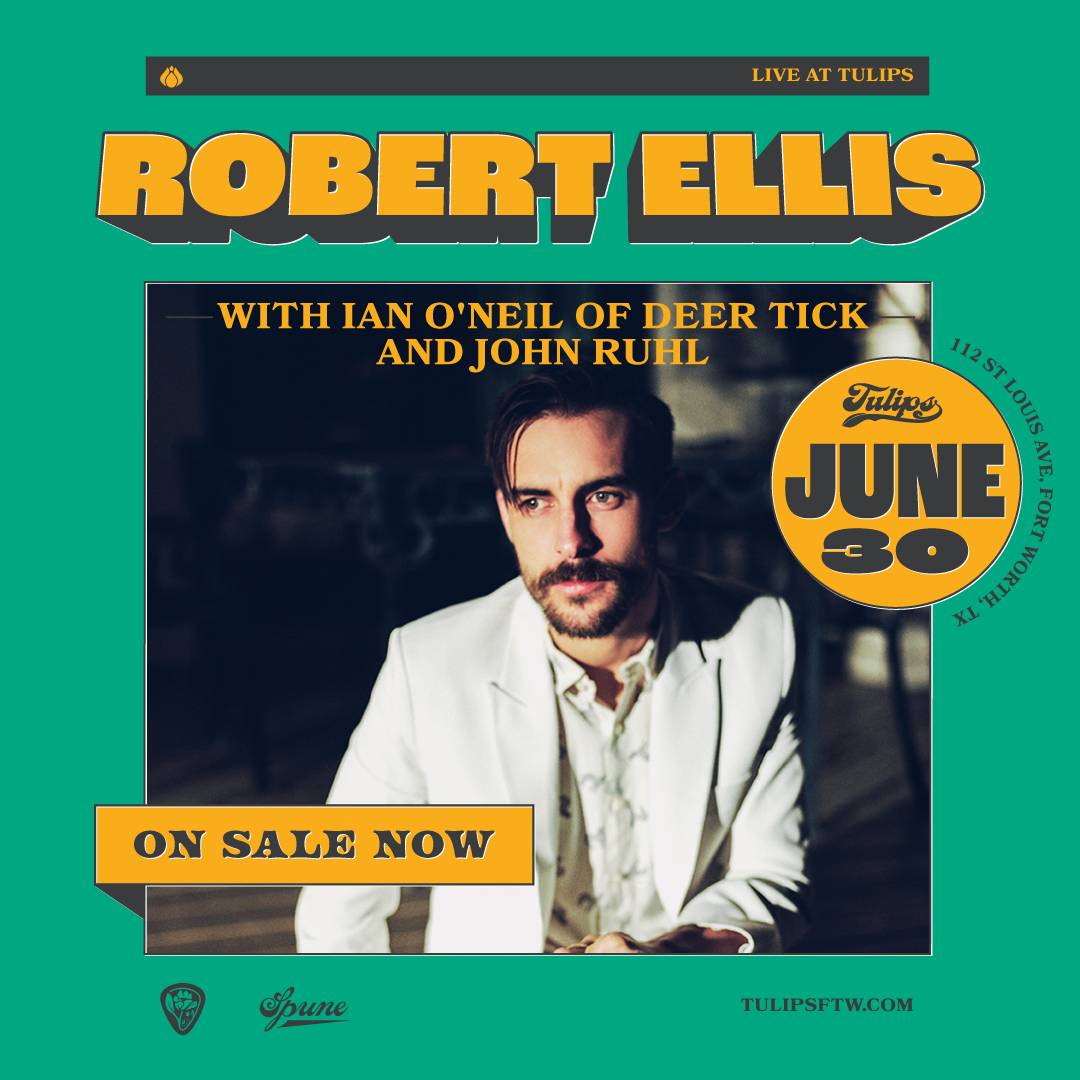 Robert Ellis Texas Piano Man “We make a lot of assumptions about different people. Heck, I like Liberace. I got a kick out of him. He played vaudeville. And he was reverent about it. He’d come out with all the rings on his fingers. It was like, ‘You could have this, too. I’m going to bring a little elegance into your rotten tomato life.’” – Tom Waits

Indeed, we particularly make a lot of assumptions about people who make songs for a living. Because Robert Ellis and his band were fluent in honky tonk and capable of burning through dozens of George Jones standards on any given night, he could have found his boots set in concrete. He has instead over the course of now four albums done his best to set wide parameters for his musical expression, befitting a guy from a state nearly 800 miles from one end to the other.

Had we paid more attention, we might’ve seen the Texas Piano Man coming with his white tuxedo and bouquet of yellow roses to hand out to fans. Maybe we made some assumptions about him. After all, Robert Ellis traveled the world for a few years, playing songs and pouring sweat each night into the unforgiving fabric of a lapis-colored western suit with Titan rockets embellishing the sleeves and a space suit-clad Buzz Aldrin standing on the flaps. If rhinestones were truly stars, the stages wouldn’t have needed lights.

Something inside wanted out. Or as one of his bandmates put it: Ellis had to create a character in order to finally be himself on stage.

Which brings us to the Texas Piano Man, a character or persona that isn’t made up whole cloth, but rather a large projection of Ellis’ wilder inclinations. A guy who named his publishing company Southern Liberace has embraced the idea of being a Rocket Man from Space City.

“With Texas, people expect a certain thing and they want a certain thing, and I fought that for a long time,” he says. “I’ve realized though that Texas shouldn’t be made a category. I want to redefine what it means to be Texan a little bit.”

This is the Texas Piano Man who made Texas Piano Man, a record that nods at its honky tonk roots set by a guitarist as he finds more room to roam while playing a stationary instrument and pulls from a tradition set by Billy Joel, Leon Russell and Elton John. Guys who sat at that large stationary instrument, and plinked away at it in a manner that balanced honesty and mythology.

Ellis’ play on this trope focuses on his Texas, which contains multitudes, a space so broad and wide open that it can contain the caricatures and archetypes seen from the rather narrow view so often taken from the outside, as well as the artists, oddballs and freaks who populate its many crannies. He knows the roadside attractions and the favored drinks and foods. That’s how one ends up with a song called “Topo Chico.”

“There’s a sort of reclamation process with this,” Ellis says. “There are young, urban Texans who don’t want to be known by the cliché that people have allowed our state to become. It’s saying, ‘NO, this is also Texas.”

So Ellis suited up to find his own play on the late, great Mr. Showmanship.

“It’s more about a spirit,” he says, “than an aesthetic. There’s the classic play of the piano man, and with a little fashion behind it. I want you to listen to the songs. But also to see the rings and the glitz and the glamor. This guy who always seems to be succeeding. And people love him for it.”

The tone on the record can swing like moods during the course of a day. “Fucking Crazy” finds that two people’s jagged parts sometimes fit together perfectly. “When You’re Away” is bracing in its frankness: “When you’re away,” he sings, “little things overwhelm me.”

Should the feelings come across as too intimate on paper, the presentation by the Texas Piano Man sells it with feral abandon and pop majesty, “screaming like an animal and rattling your cage,” as he puts it in one song before bringing in some pretty cooing vocals that remind of Brian Wilson’s work. Putting down his guitar and sitting at the piano awakened something, and Ellis likens the musical experience to being behind the wheel of “a rock solid fucking muscle car.” It’s a heavy thing, with beautiful lines.

Ellis describes the Texas Piano Man as the guy who wears the tuxedo everywhere. If there’s a ribbon to be cut, he’s there. A groundbreaking? He’ll hold the shovel and deal with the dirty suit later. He’ll christen your ship, and he won’t judge your yacht rock.

Sand slipping through hands sits thematically at the center of “Texas Piano Man.” His tux-clad host tells some stories about wanting to pump the brakes on life as it speeds along. “Nobody Smokes Anymore” isn’t a song about smoking. Well, it’s a little bit about smoking. But it’s really a song about habits and urges, as well as time and change. And that it truly is a drag getting old. Before he pumps out a piano part that sounds like a tip to “Benny and the Jets,” he declares, “One more drag and I’m out.”