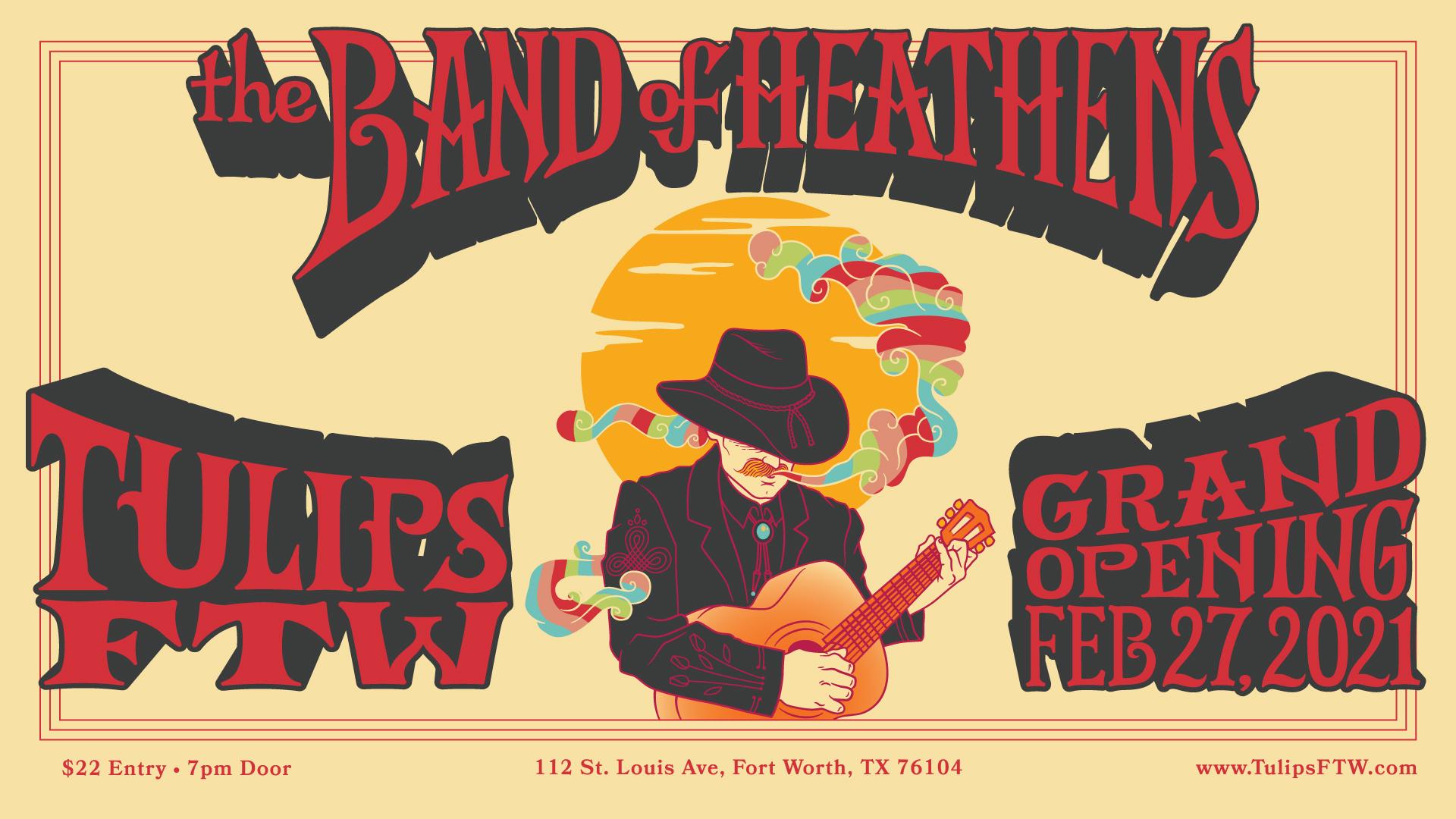 Tulips Grand Opening with The Band of Heathens

Kill the quarantine blues and help us break in Fort Worth’s finest mid-sized venue with a little rock, a touch of red dirt and tons of Texas! It’s time to plant the flag for the return of live music and what better way than some good ol’ Texas roots music! Band of Heathens will shake your soul with harmonic hymns, killer blues riffs and straight shooting snare. Let’s look forward to the good times ahead y’all.  Tickets on sale now for Tulips ‘ February 27 Grand Opening Weekend featuring Band of Heathens
ABOUT BAND OF HEATHENS
Sometimes it’s the “happy accidents,” rather than elaborately laid plans, that lead to something lasting, and that’s precisely the case with award-winning Austin rock and roll stalwarts, The Band of Heathens.

“As the band was getting together and going, Gordy and I seemed to have similar focus in terms of what our ambitions were for making music and taking it beyond the confines of what we were doing, presenting it on a bigger level,” Jurdi continues. It’s not just writing and performing the songs, there are endless choices that go into establishing the right aesthetic and tone for the presentation of the entire band, both on stage and in our recordings.”

The Band of Heathens’ first two releases were live recordings and the funky, soulful, rootsy sounds on those live records would come to be the band’s hallmark. “People say, ‘What kind of music do you play,’ and we say, ‘Rock and roll,’” Quist says. “And it’s always like, ‘Oh, rock?’ ‘No, not rock, rock and roll, with the roll in it.’ Because the roll implies a groove and a funkiness that modern rock just does not have. … We’re a rock and roll band.”

Between 2008 and 2016, The Band of Heathens released five studio albums, four of which went to either number one or number two on the Americana Radio Albums Chart, and earned a pair of Americana Music Awards nominations. Then in 2018, they released the acclaimed A Message from the People Revisited, a recreation of the legendary 1972 Ray Charles album, A Message from the People.

Also in 2018, Quist and a friend purchased The Finishing School, a studio in Austin where the band had frequently worked, after the passing of the studio’s owner, their longtime friend and producer, George Reiff.

“We’re really fortunate to be in a position to have access to a creative workspace like The Finishing School. It’s allowing us to take the final step in realizing some greater creative vision. We’ve laid down about 15 new songs over the past several months, with plans for some of this material to be included on a full length album in 2020, says Jurdi.