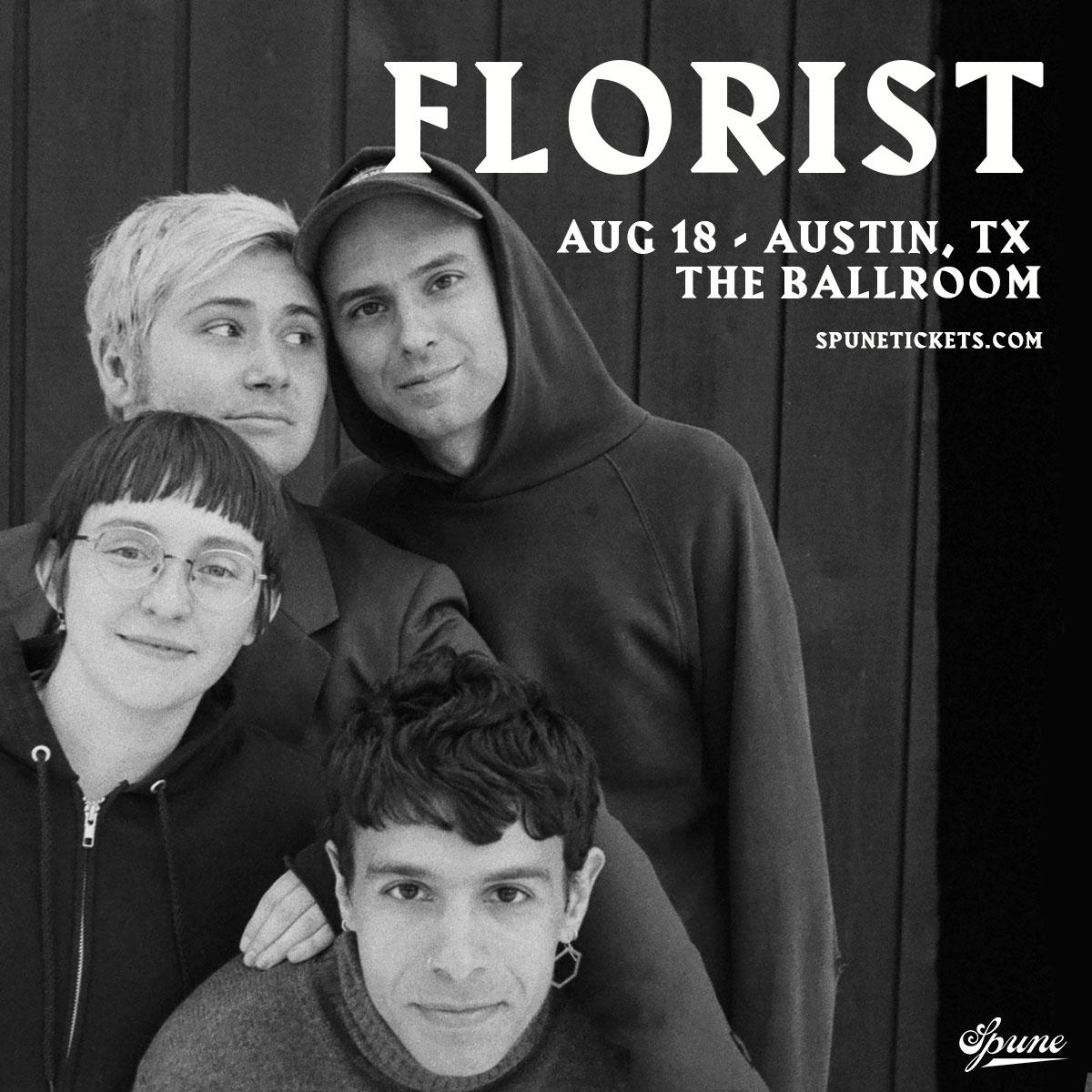 Florist at The Ballroom on August 18

“It’s a portrait of who we are as collaborators, as really long term friends and as extended family as well,” leader Emily Sprague says of her band’s new self-titled album. Florist is also the strongest album of the band’s decade-long career, an immersive work that conveys the magic of the earth and of family, and the whole of the band’s heart. It arrives just after the cap of a winding journey. In 2017, shortly after the release of the band’s sophomore record, If Blue Could Be Happiness, Sprague sequestered herself in Los Angeles, thousands of miles away from friends and family, and from the physical void and spiritual crisis left in the wake of her mother’s death. There, she took up surfing and released Emily Alone, which was essentially a solo album released under the Florist moniker. Only after months of self reflection and therapy did Sprague realize that life in a silo is no way to live. That a life directed by fear is not much of a life. “The trauma response to losing my best friend, my mom, was to feel really afraid to get close to anybody ever again,” she says. “It’s sort of cheesy, but I realized that life is better when you share it. The answer isn’t to isolate yourself and be alone.” So she began writing Emily Alone’s companion, the other side of the binary, a record that rings distinctly of Sprague’s tender and poetic spirit, filled with nature and wonder and tears, but without all the loneliness and seclusion. She also adopted a dog, who, she says, “completely changed my life.” “My mind just started exploding with all these thoughts about what it means to live with others, and live with love and care collaboration.” Then, for all of June of 2019, amid a hot and rainy summer, Sprague (guitar, synth, vocals), Jonnie Baker (guitar, synth, sampling, bass, saxophone, vocals), Rick Spataro (bass, piano, synth, vocals) and Felix Walworth (percussion, synth, guitar, vocals) convened in a rented house in the Hudson Valley, to live and work together. It was the first time the quartet recorded that way, and for that long. “In the past we’d meet up for a couple of days, or one day here and there,” Spague recalls. “Living together for a month is a really big part of why the arrangements are the way they are, and also why the instrumentals are such a huge part of the record.” They set up their gear on the screened-in front porch, which looked out onto a canopy of trees, allowing the sounds of nature to play a leading role through out. Then, they experimented. The production and recording of the album directly reflects the organic ways in which the band worked that month, with whispering voices, crickets, rain and birds accenting the aleatoric quality of the instrumentation, each player drawing from the communal energy of the woods and their interpersonal bonds. Poignant, guitar-centric meditation “Red Bird Pt. 2 (Morning)” carries on Sprague’s concern with love, loss and the natural world. “She’s in the birdsong/She won’t be gone,” she sings of her late mother, proffering a merciful sense of resolve. “Feathers” finds her facing her fears over threads of bowed guitar while “Dandelion” meditates on the beauty of our finite existence, pairing synth and fingerpicking with the spirit of Emily Dickinson. “Sci Fi Silence” occupies a liminal space between soul baring confession and contemplative new age, a swirl of analog synth that culminates in a full-band meditation. “You’re not what I have, but what I love,” the band sings over and again until the words grow into a kind of mantra, a thing that at once pierces and heals. The quartet played through muggy days and breezy nights, and often impromptu. “In between working on songs specifically, somebody would be sitting on the porch playing a little instrumental piece, and somebody else would be in the kitchen making dinner and stop, and go to the porch and pick up a random instrument,” Sprague explains. These creative bursts became the album’s ambient instrumental bridges, like “Variation” and “Jonnie on the Porch,” gentle moments that portray their life together in that particular moment. The bells heard throughout the album are from a collection housed in the rental, the animals were their neighbors. The result is 19 tracks that feel like the culmination of a decade-long journey, their fourth full-length album, but the first deserving of a self-titled designation. “We called it Florist because this is not just my songs with a backing band,” Sprague explains. “It’s a practice. It’s a collaboration. It’s our one life. These are my best friends and the music is the way that it is because of that.” After making the record they always knew they could, together, as one, Sprague could no longer live on the west coast without her band and blood. So, she returned home. Last year, she moved back to The Catskills to be closer to her father and her creative collaborators. She misses surfing, but finds peace in the area’s natural landscapes, and through a strengthening sense of physical reconnection. “A goal is to share the band’s connectedness and relationship, but also how we’re all connected,” she says. With Florist, Emily is no longer alone.