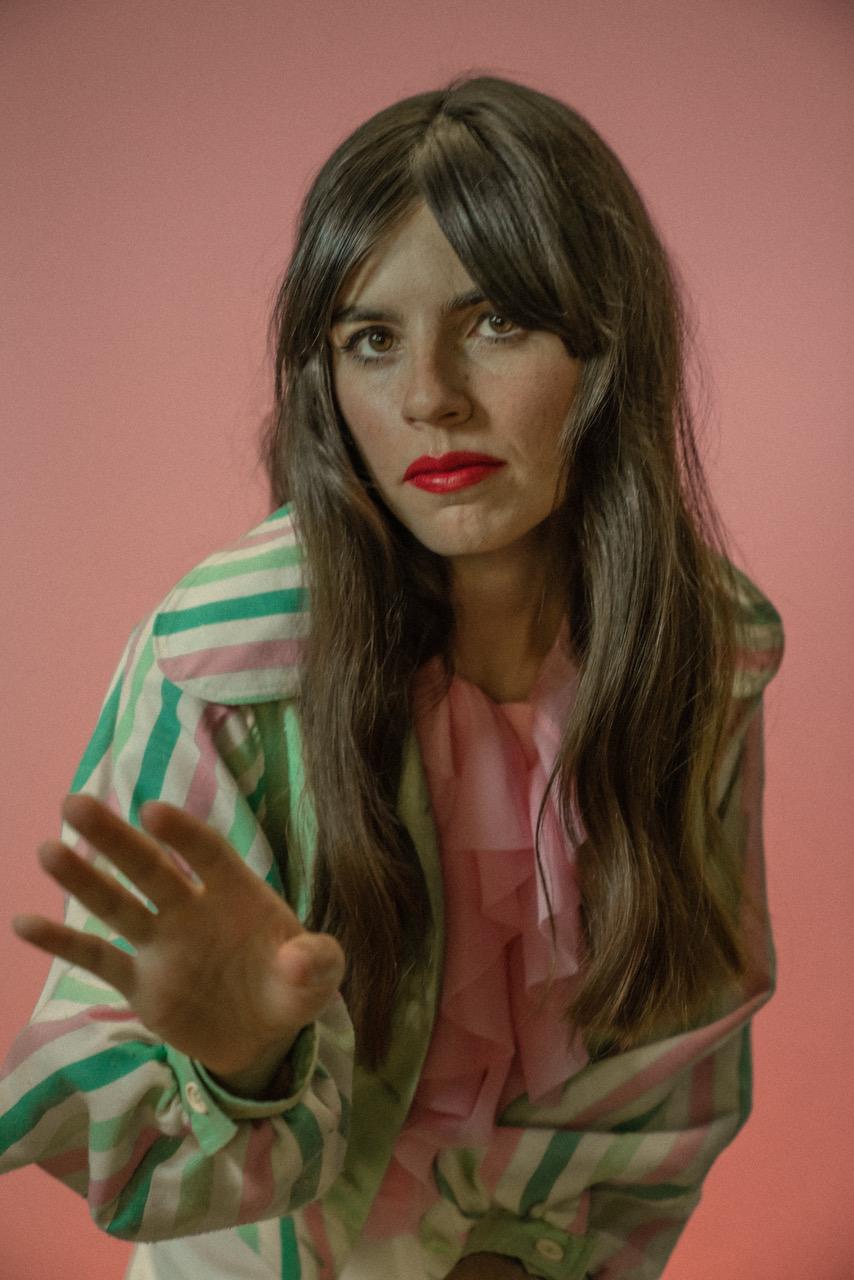 Due to circumstances out of our control, Hazel English at Ruins on May 20 has been postponed until further notice. We are currently working to reschedule the show. We hope to have information regarding a new date as soon as possible. Thank you.

“Sometimes I feel like we’re just sleepwalking through our lives. We’re not really present.” Hazel English wants us to open our eyes. Through her shimmering, daydream-pop, the California based singer-songwriter is on a mission to rattle the cages of our very existence, asking us to dig deep and ask challenging questions of ourselves. ‘Wake UP!’, her debut album, is a call to arms: an attempt to “make people become more aware and mindful,” she says.

Since debuting with bittersweet single ‘Never Going Home’ in 2016, the Sydneyborn artist has felt the urge to connect with her listeners in a meaningful way. Blending wistful, candid lyricism with jangling psych and beach-pop sounds, English’s compelling songwriting has earned her over 25 million streams, airplay on BBC Radio 1, 6Music and Beats, praise from Lauren Laverne and Annie Mac, and press acclaim with double EP ‘Just Give In/Never Going Home’ labelled by The 405 as “one of the strongest records of the year”. 2019 saw her gain an even wider audience after touring with Lord Huron and Death Cab For Cutie.

Where the double EP was very much a lo-fi, bedroom-produced record, English left her home setup behind in favour of roomy recording studios and tapped up session players for her debut album. Bigger, lusher, and more live-sounding, the LP shows a new side to English: one that conveys the joy and excitement of collaboration. Drawing from a more grandiose sonic palette while pulling on the same sun-kissed thread of her previous work, half of the record was made in LA with super-producer Justin Raisen (Sky Ferreira, Charli XCX, Angel Olsen), while English flew to Atlanta to work with Ben H. Allen (Deerhunter, M.I.A, Animal Collective) on the other half.

Listening to the record, it should come as no surprise that ‘Revolver’-era Beatles, The Mamas & The Papas, The Zombies and Jefferson Airplane were all at the forefront of her mind while recording. “Radical messages need a raw and vibrant backdrop to pop,” she says, and she’s kept her trademark sunshine-filled sound that fits her Los Angeles dwelling, but with bigger, stirring choruses. It's a testament to English’s writing style and ear for a hook that she won’t make anything that she couldn’t play stripped back to its bones, refusing to rely on production to carry a song. Standouts like the infectious ‘Off My Mind’ and ‘Like A Drug’, with its swirling hypnosis, find English’s songcraft at its most accomplished.

Lead single ‘Shaking’ wears its ‘60s psych influences on its paisley patterned sleeve. Written by Hazel and frequent collaborator Blake Stranathan (Lana Del Rey), it was a painstaking effort: “I just couldn’t rest until I had gotten it to a place where it felt like I could sleep at night. And I’m really glad I did,” she says. Tackling themes of power, lust, manipulation, pleasure, and control, its Erin S. Murraydirected video strikes right at the heart of this idea, finding English as the charismatic ringleader of her own Manson-esque cult, manipulating her subjects in a babydoll dress and beehive hairstyle. “It presents the promise of a spiritual awakening as a kind of seduction,” she says.

An open sufferer of anxiety, English wrote the record following something of an existential crisis. Stuck and isolated, she felt like life was becoming a series of mundane objectives. She began asking herself: “am I happy? Do I like the direction I’m going in life? Am I engaged with my community? Do I feel connected to others?” English realised that the answers to all these questions were, for her, resounding nos. The album’s title became a kind of personal mantra to her – “a reminder to wake up and be present in a time where we are used to switching off and looking for constant entertainment,” she says. “[‘Wake UP!] will mean something different to everyone. Like, oh yeah, I’ve been sleeping on this goal of mine, or I need to spend more time with my kids. It’s for whatever people need to confront.”

Obsessing over old movies and vintage clothing since the age of 15, English took cues from surrealism, dadaism and the writings of sci-fi novelist Philip K. Dick for the record. She wrote words before she became a musician – before a student exchange programme prompted her San Francisco move, English was studying creative writing in Melbourne and writing poetry prolifically. After reading Guy Debord’s 1967 book The Society of the Spectacle, English began pondering our obsession with self-image. In it, Debord considers how we get caught up in the ‘spectacle’: How am I perceived by others? How can I make it seem like I'm successful? English draws parallels from the ‘60s text with our social media-crazed present as “essentially creating a fabricated version of yourself and making sure it seems like you’re living this amazing life. It’s not a true experience. That just makes us unhappy, I think.”

Confronting issues with the rampant, consumerist nature of capitalism and “our human propensity for dissatisfaction,” ‘Wake UP!’ also explores power struggles, with English looking at how shifting dynamics affect relationships, be it in the music industry or in romantic life. The record dives into unbalanced power dynamics, be it “feeling stuck in a one-sided relationship where the other person cares less,” “needing space in order to seek power within myself, or feeling like I’m the one holding all the cards in a relationship.”

‘Wake UP!’ is a rallying call to our 2020 selves; a reminder of what our core values are, packaged up in a glorious, sparkling record. “I hope I can inspire others to also search for their inner truths and find their own inner strength in the process,” English says. “I wanted to create something really dynamic, and kinda wild.”