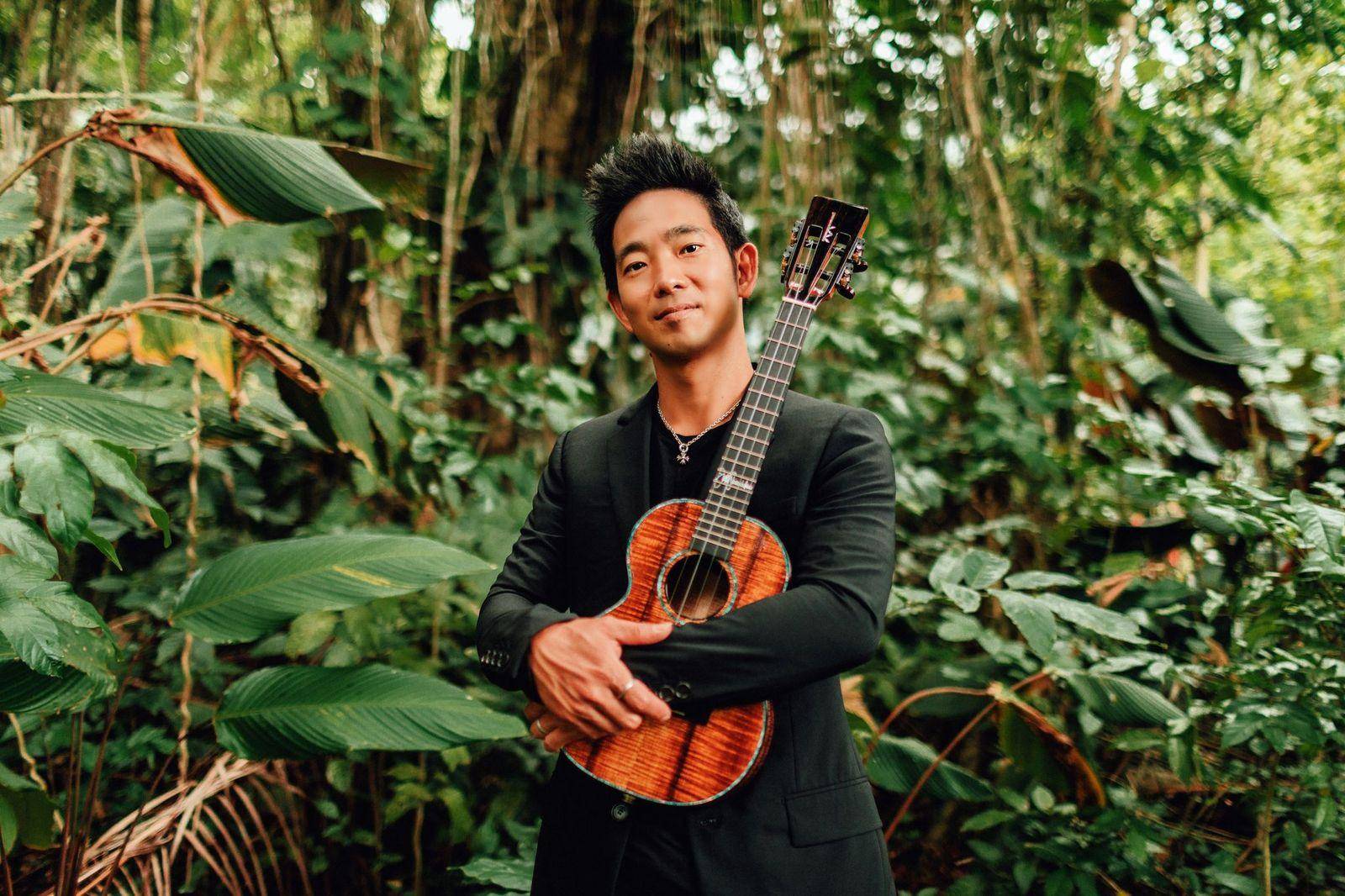 Jake Shimabukuro, Remy Reilly
Date
Wednesday
August 10, 2022
Time
Doors 7:00pm
Showtime 8:00pm
Lobby 6:00pm
Location
The Kessler (map)
1230 W. Davis St.
Dallas TX 75208
This event has ended Share
Jake Shimabukuro
On November 12th, 2021, the acclaimed Hawai’i-born ‘ukulele player Jake Shimabukuro will release ‘Jake & Friends,’ his most creatively ambitious project to-date, featuring collaborations with a who’s who of music royalty, from Willie Nelson and Bette Midler to Jimmy Buffett and Kenny Loggins. In terms of size and scope and considering the sheer number of legendary stars who graciously loaned their inimitable talents to the project, ‘Jake & Friends’ can only be compared to other benchmark duets albums by the likes of Frank Sinatra and Tony Bennett, a shining testament to just how far the singularly gifted Jake has come. Listen to the album’s first two singles, “Two High,” featuring Moon Taxi, and “Stardust,” featuring Willie Nelson.
Jake’s own head spins when looking over his high-wattage guest list featured on the album-Willie Nelson, Bette Midler, Jimmy Buffett, Moon Taxi, Kenny Loggins, Michael McDonald, Vince Gill and Amy Grant, Jon Anderson, Ziggy Marley, Warren Haynes, Jack Johnson, Jesse Colin Young, Ray Benson & Asleep at the Wheel, Sonny Landreth, Lukas Nelson, Billy Strings. “I have to pinch myself when I see those names on my own album,” he says. “It’s like, ‘Did that really happen?’ Making the album was a real challenge, but I’m deeply honored that all of the artists agreed to record with me."
Over the past two decades, Jake has proved that there isn’t a style of music that he can’t play. While versatility for any musician is impressive, what’s remarkable about Jake’s transcendent skills is how he explores his seemingly limitless vocabulary–whether it’s jazz, rock, blues, bluegrass, folk or even classical–on perhaps the unlikeliest of instruments: the ‘ukulele. Responding to the urgent calls of his fervent imagination, Jake has taken the ‘ukulele to points previously thought impossible, and in the process he’s reinvented the applications for this tiny, heretofore under appreciated four-string instrument, causing many to call him “the Jimi Hendrix of the ‘ukulele.”
Jake’s incredible journey has taken him from local phenom to YouTube sensation, from playing tiny clubs to headlining the world’s most prestigious concert venues like the Hollywood Bowl, Lincoln Center and the Sydney Opera House. He’s performed on the biggest TV shows and has released a string of award-winning, chart-topping albums. Just recently, he was nominated by President Joe Biden to serve as a Member for the National Council on the Arts. It’s fair to say that Jake has picked up more than a few admirers–millions of them, actually–but it wasn’t until he began his latest album that he discovered how many of his fans were, in fact, his very own musical heroes.
Two years in the making, ‘Jake & Friends’ started out with a modest idea of featuring perhaps two or three guest stars, but the concept quickly grew. Willie Nelson was the first artist to take part, and significantly he chose his signature song, “Stardust,” which he first recorded over 40 years ago. The uniquely sublime pairing yields magical results–Jake’s delicate ‘ukulele lines form an intimate foundation for Nelson’s achingly beautiful vocal. “I was so nervous the night before we cut it,” Jake admits, “but Willie put me at ease right away. I think once we got that cut finished, I was ready for anything that came next.”
Teaming up with the popular Nashville alt-rock band Moon Taxi, Jake revisits the group’s 2017 hit, “Two High,” and he even coaxes singer-guitarist Trevor Terndrup, a fellow 'ukulele enthusiast, to join him on the instrument. Inspired by the universal peace sign for hope, “Two High” is a sunny and breezy balm for our troubled times. “Recording with Moon Taxi was such a blast,” says Jake. “Trevor has an amazing spirit that just brightens up any room, and he can shred on the ‘ukulele. And [guitarist] Spencer Thomson holds down the rhythm and makes everything groove. It was a joy to collaborate with them.”
Bette Midler sounds heavenly on the stark yet shimmering version of her Golden Globe-winning classic, “The Rose.” Jake and Jimmy Buffett reprise their delightful rendition of “Come Monday,” a song Jake has had the pleasure to perform on tour with Buffett. “Why Not,” written and sung by multi-platinum hitmaker Kenny Loggins, is a deliciously upbeat slice of soul-pop with hooks for days and an effervescent ukulele solo that will set pulses racing. Fans longing for all-instrumental bliss will revel in the aptly named “Smokin’ Strings,” which Jake wrote and performed with bluegrass guitar sensation Billy Strings. Jake throws down with the Allman Brothers/Gov’t Mule’s Warren Haynes in epic ways on their fiery reading of the blues-rock classic “On the Road to Freedom.”
And while the Beatles have always loomed large in Jake’s repertoire (he scored one of his first hits with his resplendent version of “While My Guitar Gently Weeps”), on Jake & Friends he covers not one, not two, but three Fab Four gems, teaming up with Ziggy Marley, Jon Anderson, and Vince Gill and Amy Grant for the three tracks. The treasures continue throughout the album.
“Looking back on it all now, it feels like a dream,” Jake says with mixture of pride and relief. “I grew up fantasizing that one day I might be able to meet my musical heroes, and here I am on my own record playing with them. That’s remarkable beyond words. I’m so fortunate to have had this experience, and I can’t wait for people to hear it. I think they’re going to be able to tell that I’m having the time of my life.”  Stay tuned for additional updates.
Remy Reilly

Remy is a Indie Pop singer/songwriter from Dallas, TX.

18-year-old Remy Reilly is not only a singer and songwriter with a voice mature beyond her age, but she also plays the drums and piano. Remy got her start performing all around DFW. Remy’s love for music began early on at the age of 2 with singing. By the time she was just five years old, she was already writing her own music. Inspired by artists like Foster The People, Norah Jones, and The Cure, this teenage powerhouse is a force to be reckoned with and a fresh new face in the Dallas music scene. A songwriter wise beyond her years, Remy's first single tackles mature topics like bullying and self-love.
"Remy's songs are really next level, she has killer lyrics and such a cool view of the craft,” said Josh Fleming, frontman of The Vandoliers, “she is going to do great things.”
The debut EP was created locally at Modern Electric Sound Recorders within a year’s time. Reilly teamed up with producers Jason Burt (Medicine Man Revival), Jordache Grant, and Charlie Wiles who helped make her vision come true.
“I’m so thankful for people like Remy in my life to keep my on my toes,” said Burt. “She has a unique songwriting style already and it’s an honor to help her vision; she’s going somewhere fast!”

Here latest release "Lost With Out You" produced by Matt Pence and Sarah Jaffe is out now and in rotation at KXT in Dallas. Her second EP is due out early 2022.