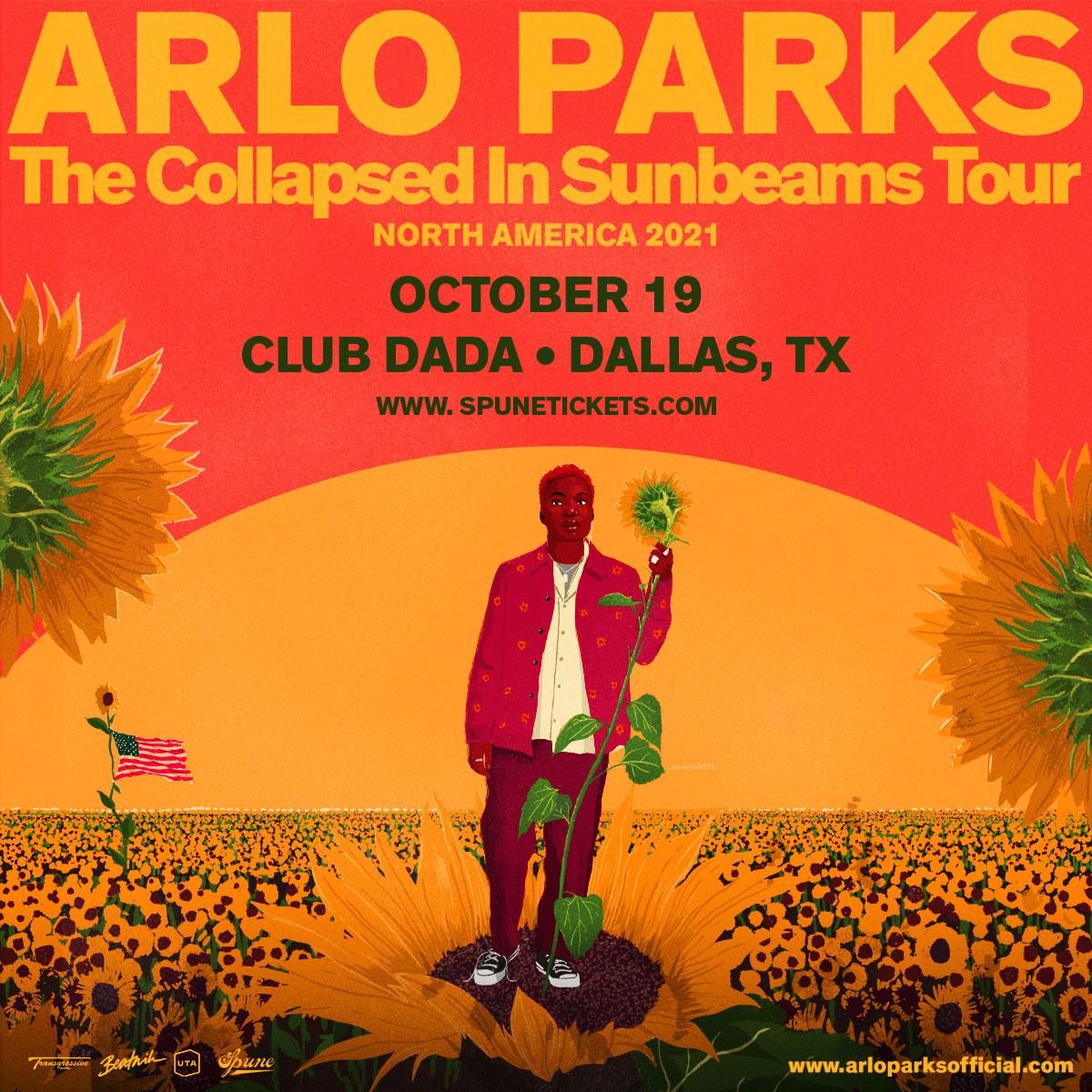 For the upcoming Arlo Parks show at Club Dada on October 19th – all attendees must provide proof of full COVID-19 vaccination (14 days past the final vaccination shot), OR proof of a negative FDA-authorized COVID-19 Rapid Antigen test, PCR, or other diagnostic test that is date and time stamped within 48 hours prior to entrance into the venue. We appreciate your cooperation!

In Arlo Parks’s world, words are as useful as photographs. Luscious, expressive vignettes pepper the poetic lyrics in her sweet, ruminative indie pop songs. Born Anaïs Oluwatoyin Estelle Marinho, the 20-year-old from West London - who burst onto the scene with 2018’s “Cola” - uses poetry as her songwriting compass, weaving vivid imagery and sensory touches throughout the stirring, honest stories that make up her already-rich body of work. “I was really interested in the idea of delving into a hyper-specific moment and making it feel universal, making it something that people could connect to,” Arlo says about drawing from poetry in her approach.

A sensitive child, Arlo grew up in a peaceful part of town. “There wasn’t that much to do, and I was a pretty happy kid, I was very much in my own little world,” she explains, describing spending her free time exploring creative ways to express her emotions. “Because I was feeling a lot, I started writing quite young,” she says, referencing poets Gary Snyder, Mary Oliver and Pat Parker and more who inspired her to write. “It’s that cinematic quality that can make you feel like you’re plunged into someone’s subjectivity,” she adds about poetry’s impact. Arlo recalls a gift from her uncle—a record collection that included classics from Sade, Earth Wind & Fire, and Bob Dylan—and choir practice as fundamentals to her musical side. Like most kids her age, she grew up digging around on YouTube for music, discovering Portishead, Odd Future, Elliott Smith, Joni Mitchell, King Krule and an eclectic range of music to root herself in.

When she was 14, Arlo downloaded Garageband and started making beats to rhyme her poetry to, which over time naturally morphed into singing and the dulce soprano that sets her apart in today’s music climate. In 2017, she took a chance and submitted her recordings to BBC Introducing, which led to her first interview, management and recording contract. In the summer of 2018, Arlo dove into her first EP, collaborating with producer Gianluca Buccellati on 2019’s acclaimed Super Sad Generation. “We were in an Airbnb in London, just writing, taking photos, and going for walks,” Arlo remembers - they ended up writing the songs in just 24 hours. Arlo’s Sophie EP quickly followed, alongside performances at Glastonbury and Latitude Festivals and supporting slots on tour with Jordan Rakei and Loyle Carner. A place on the BBC Sound Poll, and inclusion in Dazed’s 100 List, followed in 2020 - beginning a truly exceptional year for Arlo. Landing covers with NME and Evening Standard, winning the AIM One to Watch and BBC Introducing Artist Of The Year Awards, making  her debut appearances on COLORS and Later.... with Jools Holland, all whilst gaining champions in Phoebe Bridgers, Billie Eilish, Florence Welch, Lily Allen, Michaela Coel and Michelle Obama.

Arlo’s creative process has continued to develop naturally, and she’s taken the same thoughtful approach for her forthcoming debut album, Collapsed in Sunbeams, featuring the breakthrough singles “Black Dog”, “Hurt” and “Green Eyes” - which also featured vocals from friend, Clairo. While in quarantine, Arlo wrote and recorded the album’s twelve songs - collaborating again with Gianuca, but also introducing Paul Epworth (Adele, Glass Animals) and David Wrench (Frank Ocean, Sampha) - whilst drawing from the likes of Ram Dass to DJ Rashad and DJ Shadow to The Beatles to experiment with sound. “I was reading through a lot of my old journals and thinking about experiences that shaped and affected me during my adolescent years,” Arlo says about songs that unpack vulnerability, suffering and love. “I wanted to create something that still had the kind of intimacy of what I’d released before, but I did want to expand my sonic palette,” she adds. With these cues, she learned to relax and improvise, especially with playing the guitar this year: “When you're improvising, you don't have the time to overthink.” She studied the works of photographers like Ren Hang and Nan Goldin, and watched films by David Lynch and Studio Ghibli to strengthen the richness of her words. “I want the experience of listening to my songs to feel like you’re looking down the lens of a camera,” she says about the importance of distilling moments in her music.

“A lot of the reason why I write is to process difficult situations and delve into trauma,” Arlo says. And while music is her current outlet, Arlo has big plans for where she expects writing to take her. She’s working on a poetry collection and planning to write a novel. “I’m excited to go into different kinds of mediums, whether that’s directing or curating or acting,” she adds. “I want to have breadth in what I do. I’m interested in art as a whole.” A young mind well beyond her years, Arlo’s otherworldly storytelling talent and keen emotional intelligence is sure to turn her artistic dreams to reality.