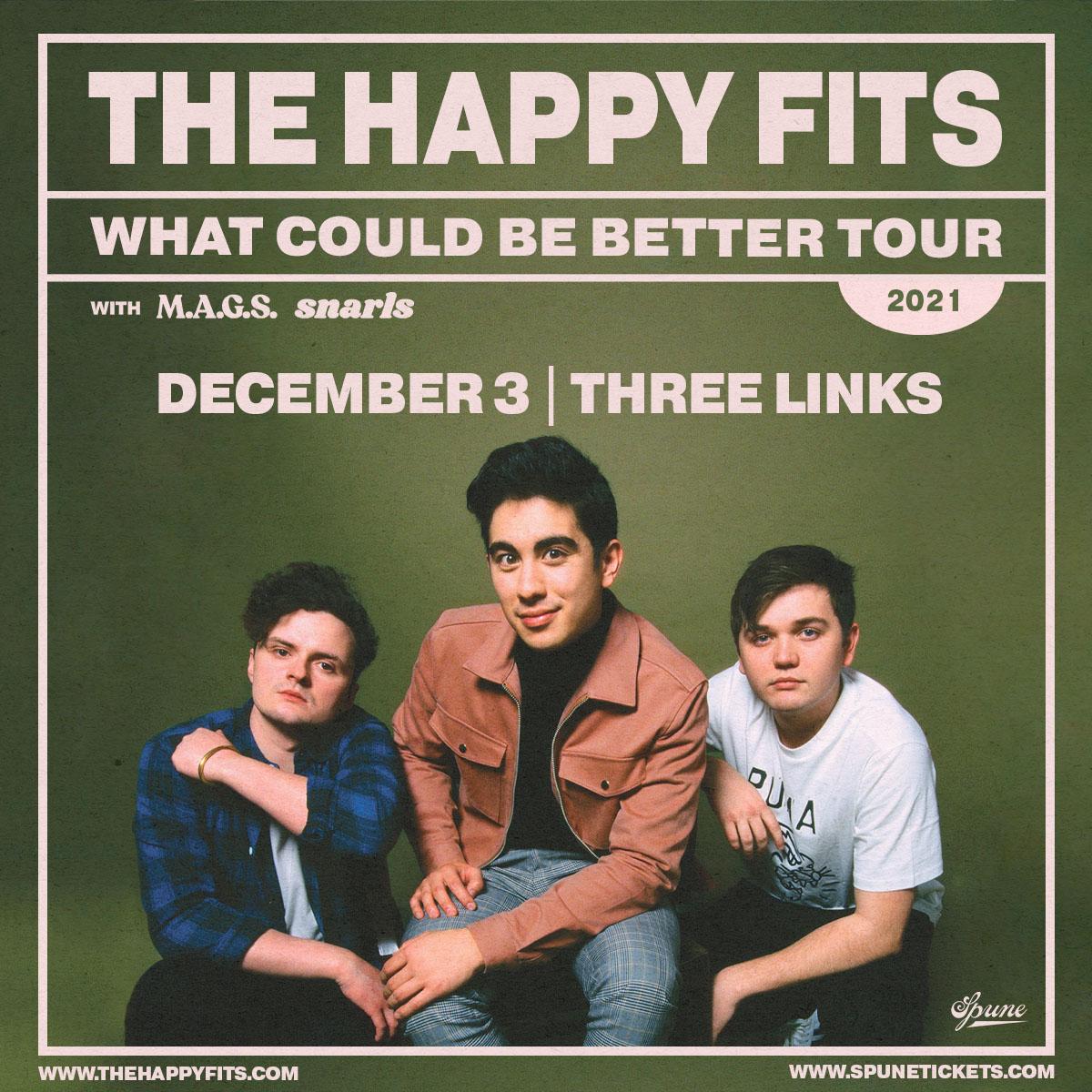 The Happy Fits with M.A.G.S. and Snarls

The Happy Fits with M.A.G.S. and Snarls at Three Links

In a time where positivity is hard to come by, the Happy Fits are here with their transportive, sunny second album, What Could Be Better.

Turning a love for the Killers and Violent Femmes into their own compact pop songwriting, the New Jersey-based trio started as a casual summer project for high school friends Calvin Langman, Ross Monteith, and Luke Davis before going off to college. After their debut EP, 2016’s Awfully Apeelin’, took off on Spotify during their first semester, school stopped looking like the natural next step.

“Honestly, we didn't know we were going to be a band,” guitarist Monteith says. “We came up with the title to record those four songs on our EP, and we thought that was going to be it, but once the songs got picked up and we really started questioning it, that's when we decided to go for it and record the first album. When we left school was when we officially became a band.”

Following their 2018 full-length Concentrate, the Happy Fits have further honed their ambition for What Could Be Better’s collection of crowd-pleasers.

“Growing up, I was either in school, at home practicing, or at music school, and there was always this pressure to be really productive,” says primary songwriter Langman, who dropped out of conservatory to pursue the band. “When I decided that I wanted to do this for a living, being productive meant a totally different thing, because now I have to create things that are just in my head and make them real.  Measuring how productive that is in my life, it's hard to do that. There's a lot of dissatisfaction I feel. I write that into the songs, all of the guilt that I feel for not sticking with a normal plan.”

From the stomping “No Instructions” to the album-closing title track, What Could Be Better channels youthful malaise into songs that demand to be sung along to. “Moving” deploys Beach Boys-inspired harmonies for a classically feel-good sound, and the integration of Langman’s classical cello training will appeal to fans of early Vampire Weekend. Far from cloying, the band’s upbeat nature is rooted in a real desire to connect with a world that sometimes seems distant.

On "What Could Be Better" Langman sings, "There's a hole in my consciousness where I feel I belong," a line inspired by his isolation as one of the few Asian-Americans in his hometown.

“I don't have crippling social anxiety, but I have always felt like I'm a bit different,” Langman says. “I grew up in rural New Jersey and was one of three Asian kids in my high school...Also, growing up, with Hollywood and TV shows, I didn't see many people like me, especially half-Filipinos.”

As the band’s stages get bigger, Langman knows he gets to be the role model he didn’t have, saying, “It feels really good to be someone that Filipino kids growing up in America could look up to.”

The Happy Fits have brought their uplifting live show across the country on multiple headlining tours, as well as supporting acts like This Wild Life.

“We bring together a large age group,” Davis, a former metalhead who started learning how to play drums from Rock Band, says of young fans who take their parents to shows. “I think one of the big connections is just when everyone's there, it becomes this community where everyone can support each other and are all enjoying the same things.”

Known for their joyous, engaging performances, the band’s sense of camaraderie is also reflected in the songs. All three members split vocal duties on “Floating,” an urgent tribute to their long-distance relationships that emphasizes the collective nature of their journey.

“We just have grown so much musically and as best friends that now we have this chemistry where we can really figure out how to work with each other in the best way possible,” Davis says. “Calvin's definitely the madman musical genius and Ross can write incredible parts. I don't know how it works, I'm lucky every day that I got to meet these guys. Having a balance with them, it's not something we can make up, it has to come naturally.”

Recorded over six weeks at Diamond City Studio in Brooklyn, What Could Be Better is a charming, efficient mission statement that’s meant to be shared, something Monteith already knows well.

“We want people to feel good listening to our music, because that's what music does for people.”

In the nine months since the albums release the band saw it debut #4 on Billboard's Alternative New Artist Chart, and “Hold Me Down” reach #30 in the National Alternative Radio Charts as well as #4 on the Sirius Alt Nation’s Alt 18. NPRs  Ken Tucker ranked it #3 on his year end  list and ended his glowing review live on “Fresh Air” with “What Could Be Better? I honestly don’t know.” Other writeups included Alternative Press, Dujour and Atwood Magazine.