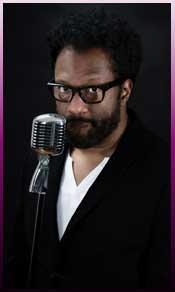 “Talent, talented and more talent” is how the CBS News series ‘48 hours’ has described Billy D. Washington. Billy is a witty, philosophical, piano-playing comedian, who works as a nationally recognized headliner. “It’s weird”, Billy muses in a recent newspaper article, “After my shows, even though people have laughed their hearts out all night, they ask me why am I not doing something else?” Billy is not only talented musically, he possesses an incredible ability to create cleverly constructed jokes and improvise obscure audience situations. After an hour of this poetic and intelligent banter, people often wonder why they haven’t heard more of him. He is quietly one of the most sought after comedians in the country, if you don’t believe it ask Aretha Franklin.

After opening one of her concerts in November 2000, Aretha was so impressed that she requested Billy to do tour dates from that day forward, he has been the opening act for Aretha Franklin every since.

Do you ever watch VH-1? In 1998 after several stimulating comedy sets at HBO’s Aspen Comedy Festival, Billy was hired by the music video network to host several of their programs. These programs included, The Michael Jackson Music Video Collection, The History of Music Video A-Z and a daily slot hosting a video music show.