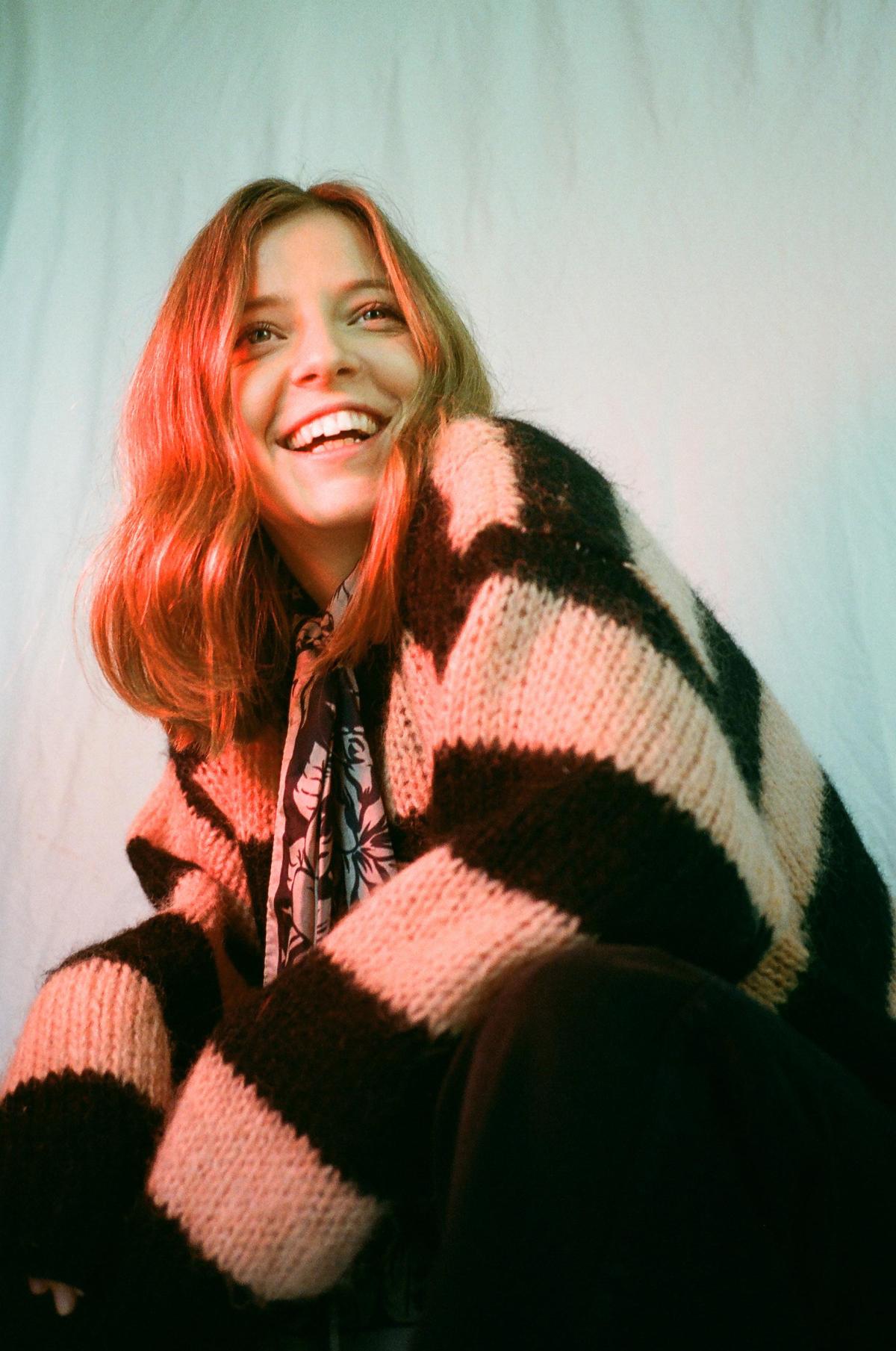 For Jade Bird, the second that lockdown lifted, there were no aimless summer days spent meeting friends in parks; no languorous evenings in pub gardens. She was headed straight back to Nashville to complete her second album -- albeit via a strict two-week quarantine in Mexico City. She allowed herself to see no more of the Mexican capital than the local store and a leg-stretching walk around the block, not wanting to jeopardise any chance of being allowed into the States to finish what she had started with Grammy-winning producer Dave Cobb (Brandi Carlile, John Prine, Lady Gaga). The highlight of her stay in Mexico was literally her boyfriend pointing out a particularly gnarly spider he spotted as he had a cigarette on the balcony. "I move on really quick," Jade explains of the urgency she felt. "My partner always says there's no in between with me whatsoever, it's on or it's off. My feeling was: I'm in it, I love these songs, I want to sing. That's why we made heaven and earth move so I could do that in that moment."

For Jade, moving fast was about staying connected to the music that she had written (as always), not capitalising on momentum or anyone else's idea of a career plan. She had a taste of the UK hype cycle, making the BBC's 2018 Sound Of... poll and being tipped everywhere from Vogue to Rolling Stone. Her self-titled debut album arrived a year later. Despite those early garlands, she didn't become an overnight success. "I was really glad," she says. "Musically I was not ready. Lyrically I was not ready. And mentally I was not ready." Nevertheless, Jade Bird -- as barnstorming an album as came out in 2019 -- received plaudits from the likes of Pitchfork and NPR. And it showed Jade, an obsessive at bettering her craft, how she wanted to build on the foundations she had laid. She was grateful that her label, Glassnote, was invested in letting her develop album by album. "If you lose a sense of who you are, to re-establish that is really difficult," she says of the pressures hype puts on developing artists. "And the time that it takes for you to re-evaluate your life, your sound, who you are, the UK doesn't have time for that either."

That mature perspective is typical of Jade, who even at 21 was wise to how young female musicians are expected to become cute ambassadors for feminism. ("I'm not sure how to do anything but what I'm doing because what I'm doing is feminism," she told the Guardian. "You don't need to wear a hashtag T-shirt.") Still, as all 21-year-olds tend to, she thought she had life pegged. A standout from her debut, Love Has All Been Done Before, looked at her mum and her grandma's respective divorces and confidently concluded that any relationship of hers would also end up doomed. She proved herself wrong: she's been with her boyfriend (he's also her guitarist) for three years. "I ended up realising I'm really happy and stable," she says.

Her new song, Houdini, puts to bed the part of her past where she was obsessed with literal abandonment. If her debut reflected on "literally every male family member being absent, present, absent, present," she says, Different Kinds of Light reflects on what it means to stay, to love, to allow yourself to be loved. It's about "being with somebody who you adore more than the whole world that hasn't got the foundations to believe in themselves," she says. "Hasn't had people supporting them in a way that their potential can be realised, 'cause they've been crippled by the people or environments that surround them."

Jade translated these conflicted emotional states into sharply observed narrative vignettes that show her flair as a storyteller: the guy oblivious to what's in front of him, the escape artist who confesses to being "asleep at the wheel my whole damn life"; the wastrel burning through their promise. "If I had a penny for all your potential, I'd be left drowning in my mouthful of metal," Jade sings on Now Is the Time. It speaks to how quickly her writing has matured from the more polemical storytelling of her debut. "When you're young, you sit in a chaos of emotions and desperately try to write out of it," says Jade, who's still only 23. "But when you're older, you work out what's affected you and why more clearly. It's amazing what two years can do: it's like you're writing as you're watching instead of writing to see."

Different Kinds of Light was properly born in a rental in upstate New York in January. (When Jade finished her day's writing in the shed and walked back to the house, there were often bear tracks in the snow.) Some came from the song-a-day project that she undertook during lockdown, which she spent with her boyfriend, her mum and grandma at home near Gatwick. In Mexico, she pushed herself to write more and found her British influences -- the Smiths, Cocteau Twins -- coming out. She used to road-test songs live; not being able to do so this year brought out a different side of her writing. One new highlight, I'm Getting Lost, "is quite a bizarre riff to jam out," says Jade, "so it helped me evolve at the same time."

After a session together earlier in the year that minted their studio chemistry, Jade returned to Nashville with more new material to bring to life with Dave Cobb, though she maintained an equally monastic lifestyle, moving strictly between her apartment and the studio to protect herself and her collaborators. She and Dave had clicked in an earlier session thanks to how he treated her potent yet weathered vocals. "I love anyone who can make you sound so imperfect in a great way," she says. They let her sound find its groove, joining tough 90s alt-rock and the melodicism of Blur and Oasis at their sweetest to the taut rattle of Iggy Pop's The Passenger. "That rock element that I've been missing and deeply love," is how Jade describes it. "If I'm in the car, that's what I put on."

There's also the spirit of Fleetwood Mac's pop epics. Stevie Nicks' Storms inspired Different Kinds of Light's title track, written last summer while Jade toured the US with Jason Isbell and Father John Misty. "It says so much: 'did not deal with the road,' 'I have always been a storm.' There's so much in that record that breaks my whole being," she says, melting. She had experienced her own hard times on tour. Anxiety would come and go: a side-effect of being hyper-productive, as she's observed in many young women. "The problem with me is that if you push me, I tend to do well," she says. "The line where I've had enough is hard to find. I think so many artists are crippled by guilt, 'cause you know that opportunities aren't handed out every day so you end up trying to do them all. It's toxic, but it comes with the nature of the industry."

Last summer, that blind work ethic resulted in Jade sometimes becoming physically unable to perform and having to cancel shows. It felt devastating at first. "After that tour, we went to Cornwall and I remember sitting on a rock and listening to Storms over and over and over again, crying and crying and crying, and it being really cathartic," she says. It wasn't that the skies cleared and suddenly everything was fine. "What frustrates me is that if you have a mental illness, it gets marketed like it's going to go away," says Jade. "I think it's counterproductive to a lot of families who are dealing with people with mental health illnesses, like depression -- you know you're going to love that person that way for life, you love them with it, and you'll never love them without it. That's who you are and that's why you love them."

In the US, Jade became part of a community of songwriters and career artists who showed her that a happier, more holistic and sustainable way of working was possible. The likes of Isbell, Sheryl Crow and Jade's friend and champion, Brandi Carlile, promote a nurturing environment, she says, and often tour with their families in tow. It was inspiring. "Especially for a young, female artist, knowing that you can be happy and do your job is really underrated," says Jade. (Also inspiring: for a truly life-affirming vision, look up footage on YouTube of Jade, Brandi and Sheryl performing 9 to 5 with Dolly Parton, Linda Perry, Maggie Rogers, Natalie Hemby, Maren Morris, Amanda Shires and more at last year's Newport Folk Festival, a vision in jewel-coloured pant suits.) Jade resents the modern idea that musicians are also expected to be marketers and businesspeople; for her, musicians are meant to be artists. She admires Brandi's longevity: "It took her six albums before she hit By the Way, I Forgive You. The work ethic! The belief!"

Hence why Jade and her partner are moving to the US -- flying out on the date of the 2020 election, no less. Plus she's young and she's never lived away from home before, bar the many months spent on the tour bus: why not? They're starting in Austin, moving in with a photographer friend, but Jade calls it "the move before the move" -- next they might go to Nashville, or Portland. Jade isn't releasing Different Kinds of Light until autumn 2021, in the hope that touring is possible again by then. (You've never heard anyone sound as unconvinced as Jade talking about how it's been to perform virtually.) "I want the album to have a moment," she says.

In the meantime, maybe she'll work on the punk album she's been making with iconic songwriter Linda Perry, a concept record inspired by the B-52s, the Raincoats and riot grrrl, and based on feminist author Charlotte Perkins Gilman's utopian 1915 novel, Herland, about a society composed entirely of women who can reproduce asexually. "It's in my back pocket," says Jade, brimming with excitement. "Third album, fourth album." There's no rush. The trepidation she felt about her profession on her debut has dissipated. "I never felt like I could call myself an artist -- like, we'll see. Whereas I know that's my occupation now. That's who I am, and that's incredibly reassuring."