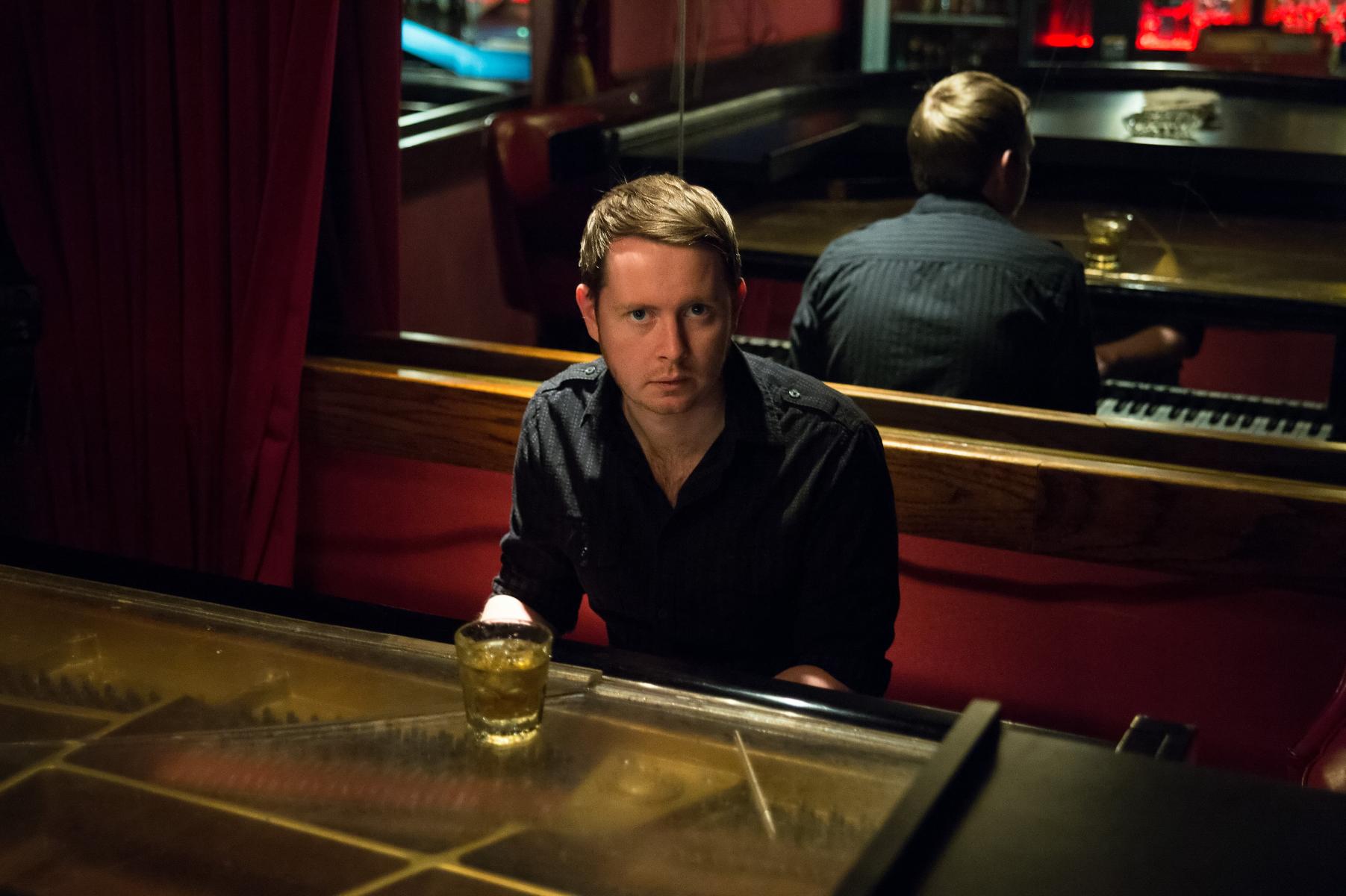 “What’s so bad about happy?” John Fullbright sings on the opening track of his new album, ‘Songs.’ It’s a play on the writer’s curse, the notion that new material can only come through heartbreak or depression, that great art is only born from suffering.

“A normal person, if they find themselves in a position of turmoil or grief, they’ll say, ‘I need to get out of this as fast as I can,’” says Fullbright. “A writer will say, ‘How long can I stay in this until I get something good?’ And that’s a bullshit way to look at life,” he laughs.

That plainspoken approach is part of what’s fueled the young Oklahoman’s remarkable rise. It was just two years ago that Fullbright released his debut studio album, ‘From The Ground ’ to a swarm of critical acclaim. The LA Times called the record “preternaturally self­-assured,” while NPR hailed him as one of the 10 Artists You Should Have Known in 2012, saying “it’s not every day a new artist…earns comparisons to great songwriters like Townes Van Zandt and Randy Newman, but Fullbright’s music makes sense in such lofty company.” The Wall Street Journal crowned him as giving one of the year’s 10 best live performances, and the album also earned him the ASCAP Foundation’s Harold Adamson Lyric Award. If there was any doubt that his debut announced the arrival of a songwriting force to be reckoned with, it was put to rest when ‘From The Ground Up’ was nominated for Best Americana Album at the GRAMMY Awards, which placed Fullbright alongside some of the genre’s most iconic figures, including Bonnie Raitt.

“I never came into this with a whole lot of expectations,” says Fullbright. “I just wanted to write really good songs, and with that outlook, everything else is a perk. The fact that we went to LA and played “Gawd Above” in front of a star­-studded audience [at the GRAMMY pre-­tel concert], never in my life would I have imagined that.”

But for Fullbright, it hasn’t been all the acclaim that means the most to him, but rather his entrance into a community of songwriters whose work he admires.

“When I started out, I was all by myself in a little town in Oklahoma where whatever you wanted, you just made it yourself,” he explains. “I didn’t grow up around musicians or like­minded songwriters, but I grew up around records. One of the most fulfilling things about the last two years is that now I’m surrounded by like­minded people in a community of peers. You don’t feel so alone anymore.”

If there’s a recurring motif that jumps out upon first listen to ‘Songs,’ it’s the act of writing, which is one Fullbright treats with the utmost respect. “When I discovered Townes Van Zandt, that’s when I went, ‘You know, this is something to be taken pretty damn seriously,’” says Fullbright. “‘This is nothing to do with business, it has to do with art and identity.’ You can write something that’s going to outlast you, and immortality though song is a big draw.”

But just as important to Fullbright as writing is careful editing. “I can write a first verse and a chorus fairly easily, and it’s important just to document it at the time and come back to it later,” he explains. “That’s the labor, when you really get your tools out and figure out how to craft something that’s worthwhile.”

Fullbright inhabits his songs’ narrators completely, his old­ soul voice fleshing out complex characters and subtle narratives with a gifted sense of understatement.

“My songwriting is a lot more economical now,” he explains. “I like to say as much as I can in 2 minutes 50 seconds, and that’s kind of a point of pride for me.”

The arrangements on ‘Songs’ are stripped down to their cores and free of ornamentation. Fullbright’s guitar and piano anchor the record, while a minimalist rhythm section weaves in and out throughout the album. That’s not to say these are simple songs; Fullbright possesses a keen ear for memorable melody and a unique approach to harmony, moving through chord progressions far outside the expected confines of traditional folk or Americana. The performances are stark and direct, though, a deliberate approach meant to deliver the songs in their purest and most honest form.

“I’m a better performer and writer and musician now, and I wanted a record that would reflect that,” he says. “We tracked a lot of it live, just me and a bass player in a room with a few microphones. The basis is a live performance and everything else supports that. I think you just get as much energy and skill as you can into a take, and then start building from there. And what we found is that you don’t have to add too much to that.”

The songs also reflect how drastically Fullbright’s life has changed since the release of ‘From The Ground Up,’ which launched him into a rigorous schedule of international touring. “Going Home” finds him appreciating the simple pleasure of heading back to Oklahoma, which he likens to The Odyssey. “When you’re gone for so long, once you know you’re headed in the right direction to your own bed and your own home, that’s one of the greatest feelings you can have,” he says.

“I Didn’t Know” is a song he premiered live at concert hosted by Emmylou Harris & Rodney Crowell, a story he tells still somewhat incredulously, while “When You’re Here” is a somber piano love song, and “The One That Lives Too Far’ is a raw account of the strain that distance can put on a romantic relationship. “All That You Know,” which features just voice and Wurlitzer, implores listeners to appreciate what’s right in front of them, and the finger­picked “Keeping Hope Alive” is a song of resilience through hard times.

To be sure, ‘Songs’ has its moments of darkness, tracks born from pain and heartbreak, but for a craftsman like Fullbright, there are few greater joys than carving emotion into music, taking a stab at that lofty goal of immortality through song. It makes him—and his fans—happy, and there’s nothing bad about that.

Miranda Dawn and Chris Hawkes formed Dawn and Hawkes after a chance meeting on an Austin dance floor. The first time they sang together they found a sound Texas Monthly calls “undeniably intimate”. Their initial duo effort, Golden Heart, climbed to No. 25 in Billboard’s Folk chart and landed at No. 2 in iTunes singer-songwriter albums kicking off a whirlwind of cross-country and international touring performances.

Acoustic Guitar hails the musicality of their first full-length, Yours and Mine, as “Impeccable vocal harmonies and instrumentation” and Huffington Post summarizes “Transcendent alternative-folk — you will find yourself craving more from this amazing, dynamic duo.”

The duo stored their possessions and lived on the road, drawing inspiration from American deserts and mountains, to the South Australian coast while navigating a shared journey through mortality, grief and compassion for differing perspectives. Upon returning to Austin, they set upon building a new home and self-producing their second full-length album, The Other Side. The Austin American Statesman calls it “10 new tracks of sweet folk-rock – instantly appealing tunes – rooted in the singer songwriter heyday of the early 1970’s, they also fit well into the modern-day indie-folk revival.”

In a time when the world seems more divided than ever, Dawn and Hawkes celebrates hope and finding our common humanity. “While on our own adventures of ups and downs we found ourselves exploring themes of empathizing with the other side,” recounts Miranda Dawn. “We hope that you will hear this album and share it with someone you love, because these are anthems of compassion for everyone who's ever felt on 'The Other Side.'”