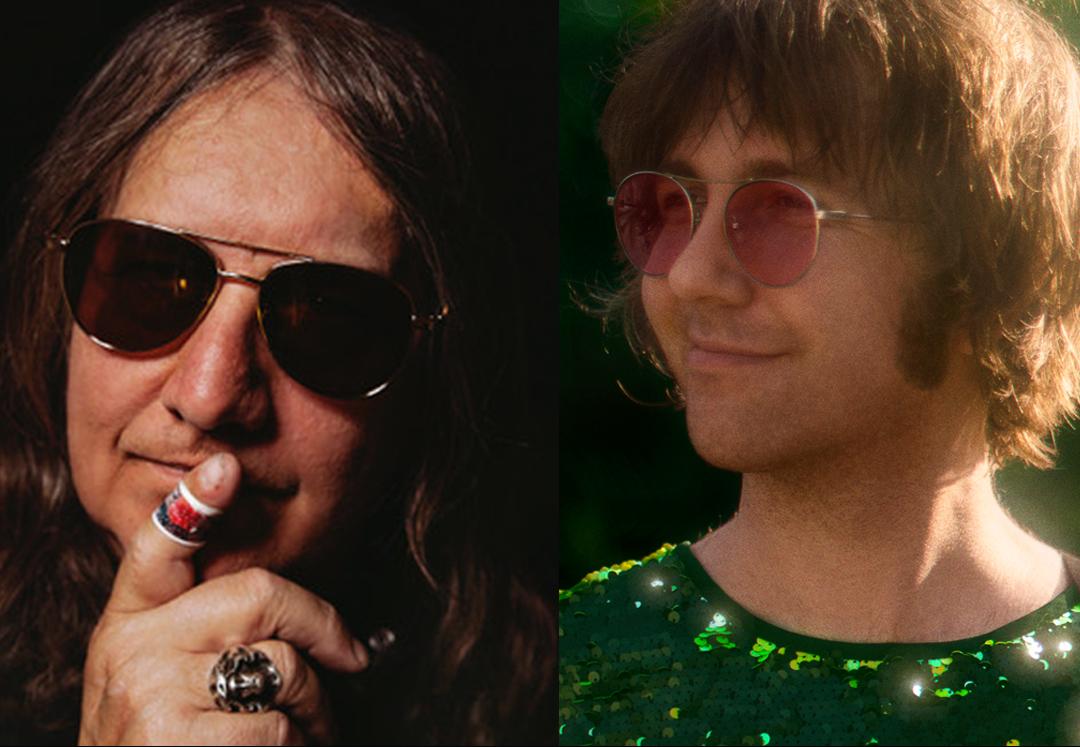 Specifically at the request of the artist, the following health and safety requirements have been implemented for all attendees at this show: Aaron Lee Tasjan & Kevn Kinney

Tasjan! Tasjan! Tasjan!, the new album from Aaron Lee Tasjan, a genre-bending rising star who’s bold reimagination of classic sounds and songwriting has established him as one of the most idiosyncratic artists of his generation.

His self-titled fourth album is a masterclass in interstellar pop, vintage glam, 90s Anglophilia and experimental and psychedelic rock & roll. Irreverent lyrics may show Tasjan with his tongue in his cheek, but Tasjan! Tasjan! Tasjan! is an album with something to say. His autobiographical lyrics reflect on self-acceptance, expose his own contradictions and offer a unique self-deprecating critique on the millennial generation’s simultaneous capacity for great empathy and narcissism. The album also explores notions of mental health, identity and sexuality and is dedicated to the alternative kids who also felt “other” growing up.

Tasjan has been on a shapeshifting musical journey his whole life. From his glam rock roots, when Jimmy Iovine told him “guys in make-up don’t sell records” and Lady Gaga would open for his band in NYC, to his legend-hopping guitar sideman days, where he played with everyone from The New York Dolls to Sean Lennon and traveled the globe, collecting road war tales from doing mushrooms with Bono to twitter spats with Peter Frampton.

His search for a musical locus and geographic wanderings began in his early teens. They took him from Delaware, to California, to New York, to his current home in Nashville. He moved there in 2015 to play guitar in a band that imploded on his arrival. Through dumb luck, he quickly landed a deal with New West Records and became an established musical entity, releasing a diverse succession of critically acclaimed albums that drew the attention of everyone from NPR Music to Rolling Stone.

Despite this success, seeds of doubt started to bloom. After multiple musical incarnations, his label questioned Tasjan’s direction and where he should go next. So did Tasjan, as he internalized their recommendations, musical paralysis ensued. He toured through 2019 and then came to a realization that he needed to give himself permission to go rogue. Sparked by the fond memory of an LSD-laced songwriting session that occured years ago, when he felt at his most accomplished and free. With equal parts uncertainty and recklessness -- he hid from his label and covertly crafted Tasjan! Tasjan! Tasjan! co-producer Gregory Lattimer and mixed with John Congleton (Angel Olson, Bill Callahan, Sharon Van Etten, Lana Del Ray)….

There was no need for doubt. With humor, wit and irony, Tasjan! Tasjan! Tasjan!’s personal and hopeful vision was a coded message to himself and showed him, self-belief was all he needed to get out of his own way. He feels grateful to his label for “motivating him to prove them and himself wrong.” Tasjan’s determined pursuit of his singular sound, led him to a sense of musical realization and his most compelling album to date.

Whilst his tour plans were pushed during the pandemic he’s been working with Noon Chorus and been delivering some great live streams and historically he has opened for Marcus King, Greta Van Fleet and opening festival stages for Willie Nelson, Jeff Tweedy and Social Distortion with his band at festivals from Stagecoach to Summer Fest to Bonnaroo.

Kevn Kinney is the lead singer / songwriter of the Atlanta rock band, Drivin N Cryin, who recently celebrated the release of their 9th studio album, ‘Live the Love Beautiful’, on Drivin N Cryin Records. Since the band's 1985 inception, he's released some spare acoustic records on his own, often collaborating with R.E.M. guitarist Peter Buck.

MacDougal Blues, released on Island Records in 1990, announced the rocker's arrival on the folk scene, with the engaging title cut and nine more acoustic tracks, produced by Buck, and mostly played by his bandmates from Drivin N Cryin. Though often cited as a working-class lyricist, Kinney cannot easily be thrown into the same bag as Springsteen, Mellencamp, or Dave Alvin. Instead, his is a unique spin on class, not urban yet not completely rural.

Kinney still continues to tour as a solo artist in-between dates with Drivin N Cryin, and is known to help host the annual Christmas Jam in Asheville with Warren Haynes. Darius Rucker cut Kinney’s song, Straight To Hell, on his album When Was The Last Time. The Drivin N Cryin song was a major hit on their album, Mystery Road, originally released in 1989.