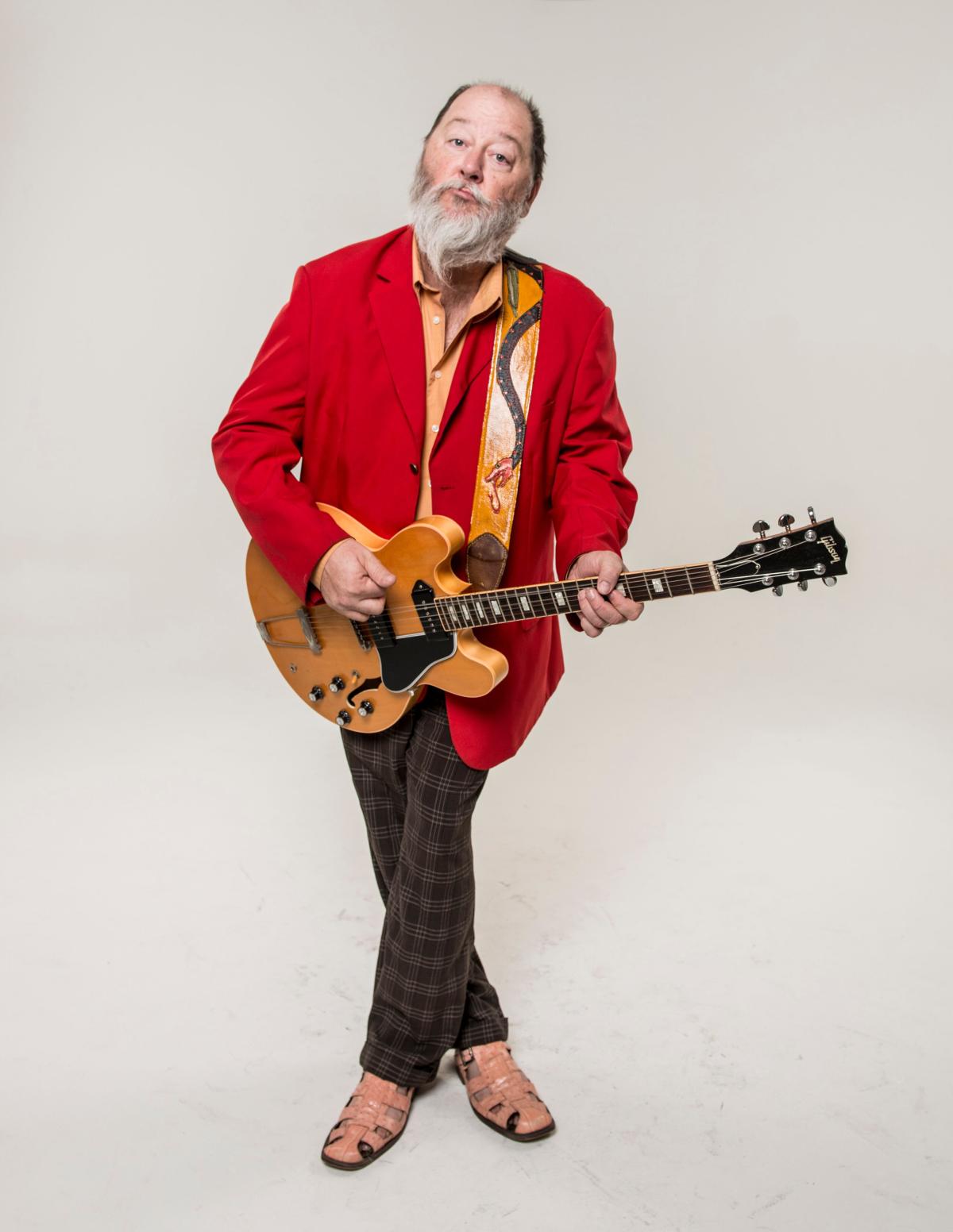 Once you’ve seen Shinyribs’ Kevin Russell on-stage and heard his band’s music, it’s impossible to forget. Known for his outrageous outfits and antics, he’s a regular fashion icon, liable to turn up in anything from his lime-green sherbet leisure suit to a flashing LED cloak, which he donned for a soulful performance of “East Texas Rust” on the award-winning PBS show Austin City Limits.

Born and raised in Beaumont, East Texas, Russell’s been variously dubbed (mostly by himself), the Baryshnikov of the Big Thicket, the Pavarotti of the Pineywoods, the Shakespeare of Swamp Pop, or the Shiniest Man in Showbidniz. One of the pioneers of Americana as a member of The Gourds, Russell took his musical inspiration from the fertile Ark-La-Tex turf. In the immortal words of the title track to their most recent album, “I Got Your Medicine,” Shinyribs have the cure to whatever ails you, moving that ass until you’re a helpless member of the Kevin Russell-led “all-in” conga line which snakes through the audience at the close of every show.

“It’s the universal dance anyone can do,” he says. “Nobody feels self-conscious or out of place. It’s a great way to get everybody involved. You can’t really top that.”

As Austin royalty, Shinyribs are one of the music world’s best-kept secrets, but not for long. The eightpiece outfit was recently named Best Austin Band for 2017, while I Got Your Medicine was tapped as Album of the Year at the Chronicle’s prestigious Austin Music Awards. Balding with a scraggly beard and an unapologetic gut, the 50-year-old Russell boasts the indelible spirit and nudge-nudge, wink-wink playful quality of a man forever young, who points to the likes of Tony Joe White and the Coasters for his Shinyribs-tickling, mind-expanding, butt-shaking “is he for real” sense of humor.

The crack eight-piece band features, aside from Russell, keyboardist Winfield Cheek, bassist Jeff Brown and drummer Keith Langford, along with the Tijuana Trainwreck Horns (trumpet player Tiger Anaya and Mark Wilson on sax and flute) and the Shiny Soul Sisters (Alice Spencer and Kelley Mickwee), as well as occasional on-stage appearances by the Riblets, Shinyribs’ very own dance troupe.

About his status as a local hero, Russell says, “The competition is pretty serious here in Austin. I don’t know how big a fish I am, but I certainly flop around a lot.”

Kevin Russell might not take himself too seriously, but he is dead-on serious about the eclectic blend of music he favors, combining Texas blues, New Orleans R&B funk, horn-driven Memphis soul, country twang, border music, big band swing, roots-rock, Tin Pan Alley and even punk into a raucous mix that includes such out-of-the-blue cover nods as David Bowie’s “Golden Years” (a posthumous tribute with an unlikely “On Broadway” groove) or the Beatles’ “Everybody’s Got Something To Hide Except Me and My Monkey” (interpolated into a live version of “Poor People’s Store,” his populist “jingle” for an imaginary bargain basement outlet).

Russell’s Shinyribs have recorded four albums since starting out as his “solo” side project, starting with 2010’s Well After Awhile, followed by Gulf Coast Museum (2013), Okra Candy (2015) and last year’s award-winning I Got Your Medicine. The band’s impending release came to fruition with demos Kevin started in his backyard studio, with Los Lobos’ Steve Berlin providing some of the horn arrangements.

Russell’s parents were both music lovers, his father teaching him his first guitar chords, “then pretty much letting me go my own way.” As a teenager, he went through a hard-core punk phase, attracted to west coast acts like Minutemen, Hüsker Dü and Gun Club, followed by an alternative/college fascination with R.E.M., the dBs and the Replacements.

“I was raised in an era where there were no rules, where marketing and specialization hadn’t yet become the status quo,” he says of his vast musical canvas. “I think of radio as playing all styles of music; everything is up for grabs. I never wanted to play just one kind of music. Honestly, I don’t know how to do anything else. I love mashing things together you wouldn’t expect, like a donut taco.

“My thing is to love and respect everyone, to accept everyone for who they are. You can be whoever you want to be at a Shinyribs show… that’s what I’m trying to convey with my music and the performance.”

The past flows through Russell’s aesthetic sensibility to become something, well, Shiny and new.

“It’s cool to see the old stuff still works. I’ve taken a great deal from the best showmen I’ve seen over the years. I don’t want people to hero-worship me like a celebrity. This isn’t about me… it’s about us. Making everybody feel special.” His goal remains to create music that makes us feel better about ourselves… even the sad songs.

“I feel good when I play and sing this music. I want everybody to experience that same pleasure. I just want to keep serving the music I love, and continue to evolve my art.”