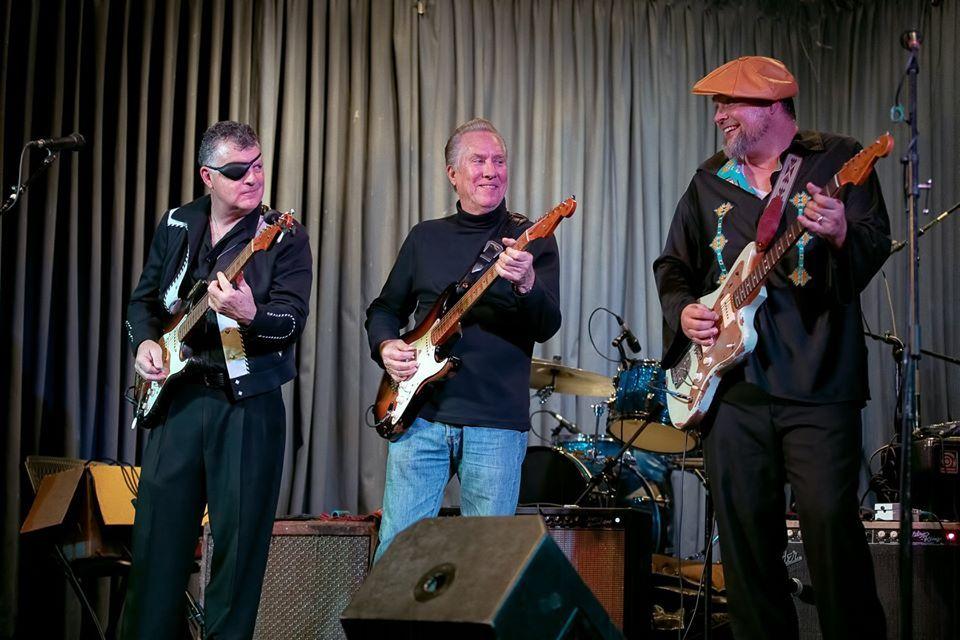 When it comes to the ‘Texas Sound’ you cannot overlook the contributions that Anson Funderburgh, Mike Morgan and Shawn Pittman have made to the genre. With over 40 albums between them collectively, they come together to remind blues audiences everywhere about the unique sound of Texas Blues. Joining forces, they look to play at some upcoming European blues festivals in 2020 and beyond.

Funderburgh was born in Plano, Texas, United States. Anson was with The Bee's Knees in 1976 and recorded "Cold Hearted Woman". In 1977 the Rockets began with Anson, Mark Hickman on Fender bass, David Watson on drums and vocalist Darrell Nulisch. In 1981, Funderburgh released the Rockets' debut album Talk to You By Hand from New Orleans, Louisiana based Black Top Records. The band consisted of Anson, with Darrell Nulisch on vocals and harmonica. The album included a cover version of Earl King's song, "Come On". Talk to You By Hand was also the first ever release by the record label.

Before the debut album's release in 1981, Funderburgh participated that same year with The Fabulous Thunderbirds in recording of their Butt-Rockin' album.

Funderburgh and the Rockets appeared at the 1984 San Francisco Blues Festival. When Nulisch left the band in 1985, Funderburgh invited the blues harmonica player Sam Myers from Jackson, Mississippi to fill in the spot. He stayed with the band until his death on July 17, 2006, appearing on eight albums with them. The first Rockets' recording featuring Myers was My Love Is Here To Stay which came out in 1986.

Anson Funderburgh and the Rockets appeared in the 1994 film China Moon, starring Ed Harris and Madeleine Stowe. They are shown playing "Tell Me What I Want To Hear" from the self-titled release. As well as the studio recordings, in 1990 the band played the Long Beach Blues Festival. The same year, they appeared on show number 109 of the NBC television program, Sunday Night.

In 1989 and 1990 the band's bassist was Mike Judge, future animator and creator of Beavis and Butt-head and King of the Hill. Their song "Can We Get Together" was also featured in the film, 21 Grams in 2003.

In 2011, The Mill Block Blues album was released. The CD was unique in that a portion of the sales of the album was donated to help fellow musicians in need via the HART Fund. The HART Fund (Handy Artist Relief Trust) is a service provided by the Blues Foundation which provides for acute, chronic and preventive medical and dental care as well as funeral expenses for blues musicians.[9][10]

In October 2012, was the first U.S. and European tour of Golden State / Lone Star Revue, an All Star package that included Funderburgh, Little Charlie Baty on guitar, former Rockets drummer Wes Starr, bassist Richard W. Grigsby and leader, harmonicist and singer Mark Hummel. The quintet was featured on Hummel's 2014 release on Electro-Fi Records, The Hustle Is Really On, nominated for a Blues Music Award for 'Best Traditional Blues Album' in 2015.

In 2014, he was nominated for a Blues Music Award in the 'Best Instrumentalist – Guitar' category.

As his prowess on the guitar developed, it became clear that he was not merely a Stevie knock-off, but rather an original player with a sound and style all his own. Mike moved to Dallas in 1986 and soon hooked up with experienced vocalist Darrell Nulisch (formerly with Anson Funderburgh and the Rockets and Ronnie Earl) to form The Crawl (named after an old jukebox hit by guitar great, Lonnie Brooks. Darrell had a tremendous knowledge of blues and a deep collection of blues records, and he exposed Morgan to the music of the Chicago blues scene and many of its key players.

As Mike and Lee's collaboration proved popular with blues aficionados, appearances at the Benson & Hedges Blues Festival, the Dallas Blues Festival, the Atlantic City Blues Festival and the Mississippi Valley Blues Festival soon followed. Shortly before a performance at the New Orleans Jazz & Heritage Festival, Morgan's old pal Anson Funderburgh took Black Top owner Hammond Scott to a gig. Scott was so stunned by the band's talent and originality that he signed them to the label immediately following the Jazz Fest appearance.

Mike Morgan and The Crawl found a national audience with the release of their debut recording, Raw & Ready, in 1990. Backed up by extensive national and international touring, Mike Morgan and The Crawl continued to amaze their fans throughout the 1990s by releasing five highly regarded albums, Mighty Fine Dancin, Full Moon Over Dallas, Ain't Worried No More, Looky Here!, The Road and I Like The Way You Work It. Morgan even kept a high profile during some down time away from the band in 1994 by recording Let The Dogs Run, a highly acclaimed record that paired him with fellow Dallas guitarist Jim Suhler.

New Years Eve 1999 saw an end to the Morgan /McBee era of Mike Morgan and the Crawl. As Lee ventured out to do his own band back in his home state of Kansas, Morgan decided it was high time he took over as front man. After years of great vocalists / front men such as Lee McBee, Darrell Nulisch, Chris Whynaught and Keith Dunn, Mike was ready to take on the new challenge.

In 2000 Texas Man, Mike’s first vocal outing was released on Severn Records. Texas Man met rave reviews and was followed up in 2004 by “ Live in Dallas.”

Mike has not been touring much since 2006. He is still playing mostly local gigs and a few scattered touring appearances. Mike is currently the sales manager at a Mesquite, TX based motorcycle dealership called "Action Suzuki / Kawasaki / Arctic Cat of Mesquite.

Mike is normally doing a three piece band with the rhythm support of Kevin Schermerhorn on drums and Drew Allain on bass.

Although he’s often closely associated with the Lone Star State since originally taking up residence in Dallas, Texas in the early ‘90s, vocalist/guitarist Shawn Pittman is actually an Oklahoma native. Pittman was born in the small town of Talihina and raised in Norman, a city located in Cleveland County, Oklahoma. At eight years old he began taking piano lessons under the encouragement of his mother, but later began sneaking into his older brother’s room to play on his drum kit. By the age of fourteen he had switched to guitar and was soon introduced to the mysterious sounds of Lightnin’ Hopkins and Muddy Waters by Bracken Hale, a good friend and member of his seventh-grade football team. Their friendship would prove significant as Hale would later collaborate with Shawn on writing material for many of his albums.

Pittman moved to Dallas, Texas when he was seventeen years old where he attended the Booker T Washington High School of the Performing Arts. He later dropped out, but picked up his music education courtesy of his uncle who would take him over to the Schooner’s jam in Dallas where he first met and learned from musicians like Brian ‘Hashbrown’ Calway, Sam Myers, Mike Morgan, Jim Suhler, Tutu Jones and many others. His first album, “Blues From Dallas,” was recorded in 1996 and later picked up and retooled for his national debut in ’97 as “Burnin’ Up” on the Cannonball Records label. His second album, “Something’s Gotta Give,” was produced by Jim Gaines and followed in ’98. Pittman toured as rhythm guitarist for Susan Tedeschi briefly in ’99, just long enough to make a television appearance with her on the Conan O’Brian Show. The following year he relocated to Austin and recorded his third album “Full Circle,” backed by Stevie Ray Vaughan’s rhythm section Double Trouble. In 2004, a more experimental and adventurous album titled “Stay” was released. After a much-needed break from the music business, as well as some serious soul-searching from 2005-2008, Pittman returned to performing and made a plan to record one album per year. By mid-2010 he already had five independently released recordings under his belt! This flurry of activity eventually led to a new record contract with Delta Groove and plans were immediately set in motion to record yet another album.

“Edge Of The World” marked Shawn Pittman’s tenth release and contains an inspired program of original material by an accomplished singer, songwriter and guitarist, recalling all the vintage tones and ambiance of the great blues recordings of the 1950’s and ’60’s. Even more astonishing is the fact that Shawn plays virtually every instrument on the CD, handling everything from vocals and guitar, to bass, drums and piano, on top of doubling as the album’s producer and engineer! Special guest Jonathan Doyle (Mighty Blue Kings, Jimmy Sutton’s Four Charms, White Ghost Shivers) represents the album’s only other personnel by contributing tenor & baritone saxophone on four songs. When asked to comment about the inspiration behind his latest and most ambitious project Pittman simply states “I’m just playing the music I want to hear!”

After seven years in Dallas (1993-1999) and fourteen years in Austin (2000-2013), Pittman moved to Tulsa, Oklahoma where he now resides closer to family and took time off to finish a degree in Information Technology. During which time he also released his 11th album (digital downloads only) ‘Backslidin Again’ (2015)

In January of 2018 Pittman decided to record his 12th album ‘Everybody Wants to Know’ with longtime friend and drummer Jay Moeller, which is set to be released on the European label CrossCut Records in the fall of 2018.