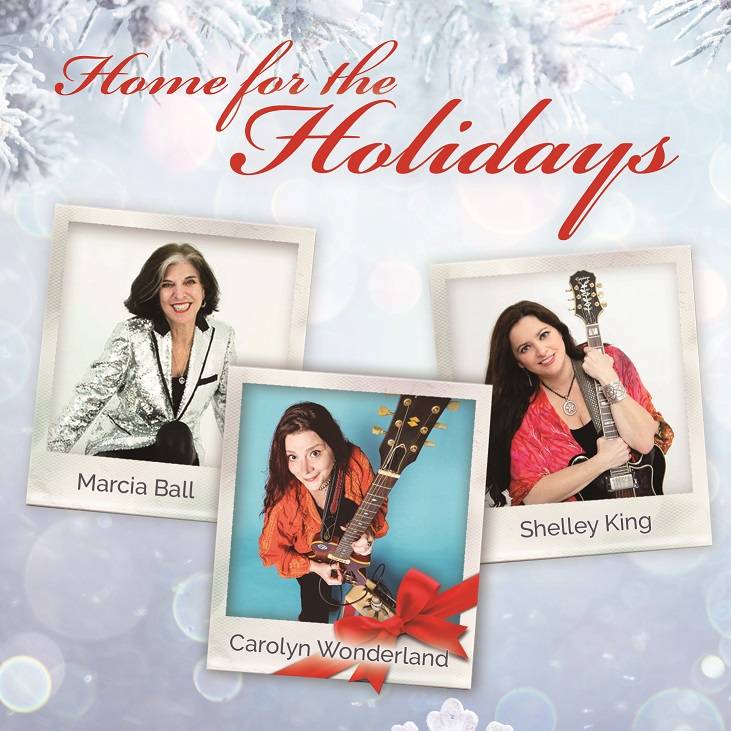 Join us for a special “Home for the Holidays” show featuring 3 renowned Texan musicians with a fun night of holiday themed music.

A musical force equipped with the soulful vocals of Janis and the guitar slinging skills of Stevie Ray, Carolyn Wonderland reaches into the depths of the Texas blues tradition with the wit of a poet. She hits the stage with unmatched presence, a true legend in her time. She’d grown up the child of a singer in a band and began playing her mother’s vintage Martin guitar when other girls were dressing dolls. She’d gone from being the teenage toast of her hometown Houston to sleeping in her van in Austin amid heaps of critical acclaim for fine recordings. Along with the guitar and the multitude of other instruments she learned to play – trumpet, accordion, piano, mandolin, lap steel – Wonderland’s ability to whistle remains most unusual. Whistling is a uniquely vocal art seldom invoked in modern music, yet it’s among the most spectacular talents the human voice possesses.

“Fifty years have passed in a flash,” says Texas-born, Louisiana-raised pianist, songwriter and vocalist Marcia Ball of her long and storied career. Ball, the official 2018 Texas State Musician, has won worldwide fame and countless fans for her ability to ignite a full-scale roadhouse rhythm and blues party every time she takes the stage. Her rollicking Texas boogies, swampy New Orleans ballads and groove-laden Gulf Coast blues have made her a one-of-a-kind favorite with music lovers all over the world. With each new release, her reputation as a profoundly soulful singer, a boundlessly talented pianist and a courageous, inventive songwriter continues to grow. Her love of the road has led to years of soul-satisfying performances at festivals, concert halls and clubs. The New York Times says, “Marcia Ball plays two-fisted New Orleans barrelhouse piano and sings in a husky, knowing voice about all the trouble men and women can get into on the way to a good time.” The Houston Chronicle says simply, “She’s as perfect as an artist can be.”

Shelley King is royalty in Texas. A celebrated singer, songwriter and band leader, Shelley’s live shows are fun musical parties. Featuring rich, soulful vocals, her songs take you on a musical journey from California to New Orleans, Texas to Tennessee, and across musical genres, two-step to zydeco, blues to bluegrass, from the church to the dancehall. Shelley has won numerous Austin Music Awards including “Song of the Year” and “Roots Rock Band of the Year”. The Texas Legislature appointed her State Musician in 2008. Shelley has released nine CDs of original music encompassing Americana, rock, country, folk, blues, and gospel. Her latest, “Kick Up Your Heels”, includes contributions from her musical friends Marcia Ball, Carolyn Wonderland, the Subdudes, Delbert McClinton, and Cindy Cashdollar. She performs regularly for standing room crowds at venues as varied as house concerts to large international festival stages all over the world. She has appeared on Austin City Limits, the longest running music show in television history. In addition to leading her own band, Shelley also tours as a side musician and as an in-demand studio performer and songwriter.