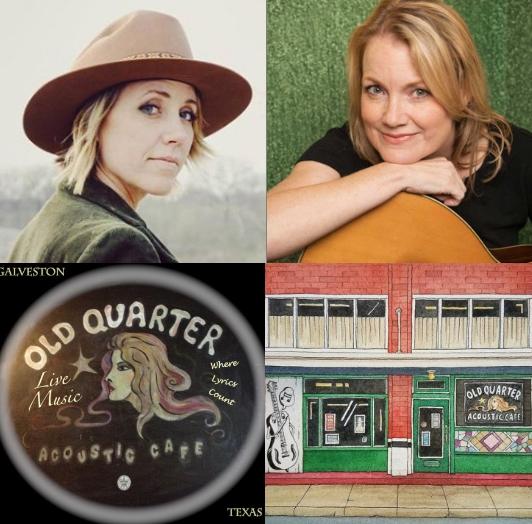 ABSOLUTELY NO REFUNDS OR EXCHANGES ON TICKETS UNLES ARTIST OR VENUE CANCELS SHOW.

THE OLD QUARTER IS A LISTENING ROOM PLEASE CONSIDER THIS BEFORE PURCHASING TICKETS TO SHOWS. LOUD CONVERSATION DURING SHOW WILL NOT BE TOLERATED.

Jamie’s anticipated new record Jumping Over Rocks marks her second full-length solo album, but she’s not the new kid. She cut her teeth fronting and co-fronting beloved bands including the Gougers and the Trishas, winning over listeners and peers across the country. Now, her place as an acclaimed singer-songwriter on her own seems fated, imbued with a singular blend of freshness and road-earned wisdom. “I consider ‘Jumping Over Rocks’ to be a definitive record on myself and my style,” Jamie says. “I hope it’s something people connect with, that it’s familiar to them but also new. I hope that people find it interesting.

is Back Being Blue, to take a color-coded cue from the title of her seventh album. It’s a shade she wears well, though long-patient fans might just say: You had us at back. They’ll take a new Willis record in whatever hue it comes, now that it’s been 11 years since her last solo release, 2007’s Translated from Love. The Austin-based singer/songwriter has hardly been MIA in the intervening years, having recorded and toured as part of a duo with Bruce Robison. But she’s setting the duet Mm.Oo. aside for do-it-alone mode, at least as far as the spotlight is concerned.  (Robison hovers just outside it this time, as producer.). Hers is a solo voice again, but it’s not necessarily sotto voce: This is an album of songs about lonesomeness that also happens to be a cracklingly good time.