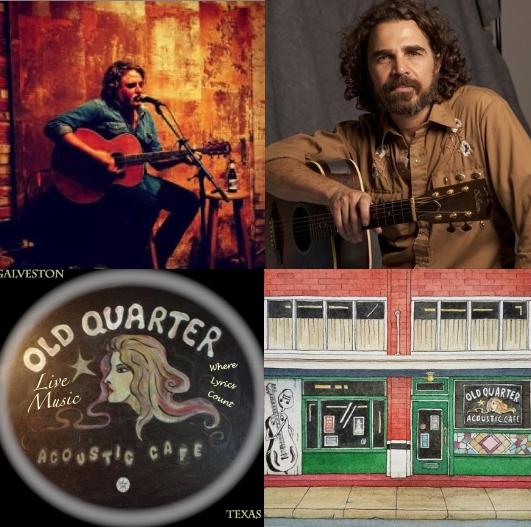 ABSOLUTELY NO REFUNDS OR EXCHANGES ON TICKETS UNLESS ARTIST OR VENUE CANCELS EVENT.

THE OLD QUARTER IS A LISTENING ROOM. LOUD CONVERSATION DURING SHOW WILL NOT BE TOLERATED. PLEASE CONSIDER THIS WHEN PURCHASING TICKETS.

From the piney woods of East Texas to the flat lands outside Lubbock, from the rolling prairies of Central Texas to the sandy shores of the Virgin Islands, Gabe Wootton has covered more than a few miles. With an eye on the horizon and an ear in the wind, he has found melody in the mundane and rhyme in the hum of life. A sketch of scenes in passing, character studies of the broken and the jubilant, triumphant tales of ruin to joyful lamentations of woe, Gabe’s songs run the gamut incorporating elements of all the music he has stumbled upon throughout his life.

https://www.poetontherun.net/
immy Pizzitola is a Houston based singer/songwriter, night-time landscaper, and lover of all things jellicle (except Cats).  His early musical influences, driven into his three year old skull while being held captive in the back of a 1968 blue Malibu by his carpool-driving mother, were the singer-songwriters of the 1970’s.  Between dropping off and picking up siblings and assorted neighborhood ruffians, Jimmy was force-fed Jim Croce, Neil Young, James Taylor, Gerry Rafferty, and of course, Der Weinershnitzel corn dogs.  Come weekend, he would often head out to South Texas with his father and grandfather to shoot at things.  Sitting on the console of a Ford Bronco, squeezed in between stacks of 8-tracks and bottles of V.O., he would sing along with Waylon, Willie, Hank Williams (Jr. and Sr.) Don Williams, and other country-fried offerings of the time.
All Ages