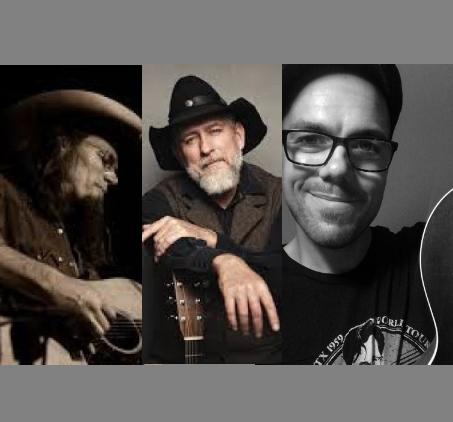 THE OLD QUARTER IS A LISTENING ROOM. LOUD CONVERSATION DURING PERFORMANCE WILL NOT BE TOLERATED. PLEASE CONSIDER THIS BEFORE PURCHASING TICKETS.

Fifth generation Montana musician and songwriter Sean Devine has traveled widely, performing and recording across the U.S. and in the U.K. His third studio album 'Austin Blues' was recorded live to tape in three days at Cedar Creek Recording in Austin, Texas, and released on CD and vinyl as well as for download and streaming. Sean still calls Montana home, and he can be found there from time to time with his three kids, two cats and one dog in Paradise Valley.
CHUCK HAWTHORNE
Austin-based and Amarillo-born, Chuck Hawthorne’s experiences working cattle on the Texas High Plains and traveling the world in the US Marine Corps shaped much of the subject matter of the songs on his debut album Silver Line. The album received critical acclaim across the US and Europe and landed on the best of the year lists for many noted publications, including The Telegraph (UK), The Alternate Root, The Troubadour Show, and John Conquest’s Freeform American Roots Awards.
Chuck’s songs have caught the attention of the songwriting community, earning him a reputation as a “songwriter’s songwriter.” He’s been called “a workingman’s songwriter” by Gurf Morlix, and “one of the best songwriters I’ve heard in 20 or 30 years” by Michael Martin Murphey. Richard Dobson says “I figured Chuck Hawthorne was the right stuff when I saw him shut down a crowd of rowdies one night with just him and a guitar. He plays it, writes it, and sings it.” Silver Line producer and Juno Award winning songwriter Ray Bonneville says, “Chuck Hawthorne was a combat soldier with the heart of a true poet. I think that is rare and what sets him apart….He’s got some salt on him.”
TOMMY LEWIS
Tommy was raised in Alvin, Tx, learning jazz trumpet from professionals, including Dick Frerking. He taught himself to play guitar (mostly to impress a cute John Denver fan) after moving to Iowa, became involved in the local scene, and eventually joined Rick Burke's Traveling Music Show and Review in 2012. He and Kevin Lindgren met while both were part of Rick's convoy, and broke out to start Lindgren and Lewis. LnL was named "one of the best new bands on 2013" by music review "The Insider Sessions" and performed in Nashville, Las Vegas, Kansas City, Des Moines, Houston, Dallas, and Oklahoma City.

Learning songwriting and performing from craftsmen like F. Charles Persall, Chad Elliott, and Rick Burke, Tommy quit his job as a professor at Graceland University and struck out as a traveling folk singer, playing over 200 shows a year, sometimes over 250. When asked by the Anamosa Journal what he called his music he replied, "It's folk music I think. If it makes people dig a little deeper into themselves, or feel like someone else knows their life and their struggle, then I guess it is folk music."
Some days Tommy lives in a small town west of Nashville, other days he lives in Alvin, Tx, and in between he can be found in the blue pontiac flying down the road. He enjoys fishing and writing, playing fiddle to the woods, and hiking the wilderness.
All Ages